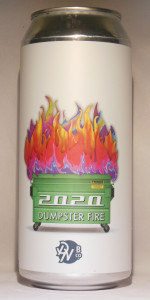 4.43/5  rDev +6.5%
look: 4.25 | smell: 4.25 | taste: 4.5 | feel: 4.5 | overall: 4.5
Poured into a Fremont small snifter. Pours a very dark mahogany brown, appearing opaque black in the glass with a one finger dark khaki head with great retention and nice lacing. Aroma of dark toasted malt, milk chocolate, hot pepper, green pepper and a little coffee; distinct, but mild hot pepper burn. Flavor is dark toasted malt, cayenne, green pepper, dark and milk chocolate and coffee, hot cayenne builds into the finish and leaves a solid hot, but not overwhelming fire along with rich chocolate. Medium bodied with moderate creaminess. Wonderfully done hot pepper stout. I've enjoyed just about every one of these I've had over the years, but each new one makes me wonder if I did the right thing getting it. This is the first with cayenne, I believe, and I was thinking of the red, dried powder I cook with, but the aroma and flavor bring out the green pepper flavor of fresh cayenne; it's rather surprising to have such a fresh taste here. The pepper is noticeable at first sip, but then builds as the deep malt flavors dissipate in the finish, leaving hot pepper and a very nice chocolate character. The finish is a lot like a quality chocolate with hot pepper. Very nicely done. There's a burn here, but it's handled deftly and the malt is fully supportive. Very nicely done.
Apr 21, 2021

Notes via stream of consciousness: So this is a smoked chocolate stout with cayenne pepper, eh? Nice artwork on the label by the way. It's a really dark beer. It's an opaque black even when held to the light. The head is a finger's width of rocky dark tan, and it's holding quite well. In the nose I'm finding a little bit of smoke but mainly dark chocolate. It's an ashen or charred wood kind of smokiness. The flavor follows. It's got a pretty firm smokiness to it but I can't tell what wood was used. It might be beechwood but I doubt it, it doesn't have the sweetness. Maybe applewood? I can't tell as the chocolate interferes, and then the spiciness and heat from the cayenne completely throws me off. Hmmm, I'm thinking now that it's not applewood either, that has a kind of sweetness to it as well and this is different. Anyway, I'll just say it right now, I think this beer is over spiced. It hit me almost immediately in the first sip and it's only built since then. I understand why it's there as the beer is called "dumpster fire", but it's not offering anything positive in the way of flavor, and it's distracting from everything else. It's hot and bitter, and almost medicinal in the finish. I find it poorly balanced, but to be honest, beyond that I think that the smoke and pepper they chose were both bad choices. The chocolate is great but the wood isn't working, and cayenne just adds heat as opposed to peppers that give some pepper flavor. That really about covers it for me but let me try to go over everything else. The chocolate flavor is really nice and I think without the spice and smoke this would be a great beer. I should also note, however, that I really like smoked beers and I recognize that others might find it too smoky as well as spicy. It really is a little bit of a daredevil beer in that if you think about it - both a smoky and spicy beer!? That's got to be a hard sell as it only appeals to a very small percentage of the population. The alcohol isn't noticeable, but hey, with all of that heat from the cayenne how could you tell? In the mouth it's medium bodied and gently crisp, no problems there. My conclusion is that if you like smoked beers, AND spicy beers, and don't mind lips of fire go ahead and give it a shot. Haha! This one even has my tongue on fire. Crazy.
Review #7,264

4.46/5  rDev +7.2%
look: 4.25 | smell: 3.75 | taste: 4.75 | feel: 4.5 | overall: 4.75
Sometime during the following year, a pint can of this ended up in a clear glass liter mug. There has been a noticeable void in amazing "hot" brews since Free Will seemed to stop producing Safeword. No doubt, it's a stout. The color is black coffee and a roasted malt aroma greets. Glass lacing is marginal and a noticeable head is just about non-existent, despite good carbonation. The chocolate and smoked cayenne peppers don't contribute much to the smell. First impression is how velvety the brew is on the tongue. The chocolate contribution ends up tasting more like coffee, probably because the cayenne was roasted. This is amazingly drinkable, considering the 8.8 ABV and the amount of heat generated by the inclusion of the peppers. The finish ambushes and becomes very, very spicy. This doesn't bring the Scovilles of Safeword, but nothing did. Still, unless picante is an enjoyable taste experience, leave this behind. If they're enjoyed, this is a must try.
Jan 15, 2021
2020 DumpsterFire from Double Nickel Brewing Company
Beer rating: 4.16 out of 5 with 5 ratings