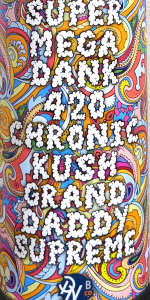 Notes: Stuffed to the gills with oats, flaked oats, and wheat to give you a floating on cloud 9 base that mingles ever so nicely with our hot dab, cold double plunge of Citra, Mosaic, and Azacca. Super Mega Dank 420 Chronic Kush Grand Daddy Supreme allows you to elevate to a higher plane and into the dank juicy clouds of hop-powered tangerine, peach, and apricot. A thick, coating mouth feel with an intense fruity hoppiness lets you celebrate 4/20!
View: More Beers | Place Reviews
Recent ratings and reviews.

Rated by heymikew from California

Notes via stream of consciousness: My first though on this beer was that if no one's entered it yet I'm just going to pass because there's no way I'm writing out "Super Mega Dank 420 Chronic Kush Grand Daddy Supreme". So what is it? It's a "dank & hazy IPA" at 7% ABV, double dry-hopped with Mosaic, Citra, and Azacca. As a side note, I always find it interesting when I read that a beer is "double dry hopped" because some breweries do a good job with that, but some other cheap bastard breweries are doubling their hops up to about the level that the other breweries have begun with! So... double dry hopped doesn't mean anything until you've taste the beer. Fortunately Double Nickel isn't one of those cheap ass bastard breweries so here we go! It's poured a cloudy golden body beneath a massive head of rocky off-white foam that doesn't seem to want to settle down. I'll wait... ... ... ... ... OK, that was long enough. I've topped it up and I've still got a fairly tall head. I don't know of this is good or bad, but I don't see any big bubbles rising up through the haze, so I'm guessing it's a good thing - big bubbles here would indicate over-carbonation, but that's certainly not the case. OK, how's the aroma? It's not massive for a beer called whatever the F it's called, and for being double dry hopped, but it's nice. It's fruity, sweetish, and thusly... maybe even candyish? I'm missing the "dank" part just like I was with the last "dank" beer I sampled from them but it did show up in the end so maybe it's here and I just haven't found what I'm looking for. On to the taste... WHAM! Now we've got something. That's rich. It's sweet but not too sweet, and it's massively fruity. I think the berry flavors are the top note, layered over mango, peach, orange, nectarine, non-specific melon, apple, guava, and pineapple - AND YES, THERE IS SOME "DANKNESS" TO IT! Wow, it's velvety and smooth but there's a lot of funk going on once you get into it. I'm going to definitely call both oats and wheat on this one, probably with Pilsner but perhaps just 2-Row American brewer's malt as well. I could even see a touch of honey malt but that's just a guess. A firm bitterness keeps it in check, and it finishes dry, raspy, fruity, piney, and subtly earthy. The alcohol is adding in to it, and there's some hop burn from the acids. I'm still not going to go with "Super Mega Dank" but it sure has something going on. In the mouth it's medium bodied with an effervescent caress of carbonation before warming to become silky smooth. Looking back the head held up very well and I still have an almost completely solid surface covering. The lacing could be better, but it's OK. In the end I'm going to go out on a limb and say that this is a little bit of a unicorn of a beer. I've never had anything quite like it, and yet at the same time it initially appeared very basic. Get it while you can.
Review #7,319

Rated by JMT1 from Pennsylvania