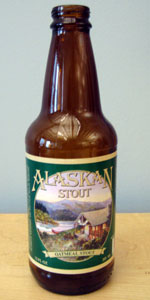 Notes: The unique blend of the oats and malts in Alaskan Stout produce a balanced, smooth beer with hints of coffee and caramel.
View: More Beers | Place Reviews
Recent ratings and reviews. | Log in to view more ratings + sorting options.
3.77 by craigbelly from Iowa on Oct 16, 2019

Pours dark with a nice, creamy head. Taste is remarkably smooth, with some cocoa and coffee notes nicely balancing each other out. Finish is smooth, with a coffee finish. Definitely one of the better ones!

Ultra black body with a tan, soapy, velvety head that fades to absolutely nothing. The nose has dark malt, molasses, charred toast, and a touch of dark chocolate. The taste is a bit sweeter, forgoing the bitterness to instead favor some sweeter malt and oat flavors, plus a nod to barbecue tang. The feel is rich, full, velvety and smooth.
This is a stout's stout. Nice dark flavors, rich body, no flaws. Ya.

Well for review #2900 I guess we can visit this beer that has been around for ~20 years. Pours black, 1/2" tan head. Looks solid. Aroma, mostly burnt malt giving off what we used to call mild coffee tones before breweries went all in on using coffee as an adjunct.

Taste is a straight up chewy malt excursion with some cascade and/or chinook hops to balance this boy out. Mouth feel is very good, chewy, just keeps rocking you and not in the alcohol sense. Lower carbonation is well placed to keep this smooth.

In a world of giant ass stouts and Chicago pours, this is a nice stout you can easily handle 12 oz of no problem. Good stuff, would share one of these with Dr. Carroll any day.

Pours opaque, dark brown in color with 1/3 inch head. Taste is chocolate malt, roasted malt, followed by light oatmeal. Medium-heavy bodied, roasty with low carbonation. Makes for a solid, above average oatmeal stout that I would get again.

Poured into an English pint glass, the appearance was a rugged dark brown color with a finger's worth of white foamy head that stiffened and then moderately slid off. Some speckled to spotty lace ran around the glass somewhat nicely and then slid into the beer.
The aroma had some sweet roasted oats, then some oatmeal. Mild bitter dark chocolate particles weave their way around the oatmeal. Subtle earthy crisp hop joints at the end.
The flavor leaned into the roasted portion of the oats and added a light coffee bean sort of taste. Sly blended sort of roasty to sweet sort of aftertaste.
The mouthfeel was about medium bodied with a fair sessionability about it. The fairly low ABV made it feel that way, I guess. Carbonation felt somewhat low, but didn't bother me as there was some grip from the roast along my tongue.
Overall, for the most part, it's a pretty nice oatmeal stout. I had to warm up to it but I understand this beer enough now to realize that Alaskan did a good job with this one.

I picked up a bottle Alaskan's Stout for $1.69 at The Lager Mill. It's been a while since I've tried a new Stout and I thought I would take a chance on this one, so lets see how it goes. 2017 Vintage. Poured from a brown 12oz bottle into a Imperial pint glass.

A- The label looks nice, it's got a nice scenic design and it's just a little eye catching. It poured a dark black color that didn't let any light come through and it had two fingers worth of bubbly slightly darker tan head that died down to a thin ring that stayed till the end and it left a little bit of spotty lacing behind. This is a pretty nice looking stout, but I wish it had a little better lacing.

S- The aroma starts off with the a slightly higher amount of medium sweetness with the malts being the first to show up and they impart a mixture of dark malt, roasted malt, milk chocolate and sweet malt aromas with the milk chocolate being the aspect that sticks out the most in the aroma and it's followed by a pretty light nutty aroma. Up next comes a little bit of creaminess that goes into the yeast which imparts a little bit of an English Ale yeast like aroma and the end there's just a little more sweetness with a slight smokey aroma. This beer has a pretty nice aroma, I like the milk chocolate aspect.

T- The taste seems to be pretty similar to the aroma and it starts off with a slightly higher amount of medium sweetness with the malts still being the first to show up and they impart all the same aspects that they did in the aroma with the milk chocolate still sticking out the most with just a little more of a nutty aspect than I got in the aroma. Up next comes the yeast which shows up just as much as it did in the aroma and it goes into a little more of those sweet creamy flavors. On the finish there's a lighter amount of bitterness with some more sweetness and a slight smokey and charred malt flavors that goes into the aftertaste along with some more roasted malts and milk chocolate. This is a pretty nice tasting Stout, it's true to style and the it's well balanced.

M- Smooth, pretty crisp, slightly prickly, on the thicker side of being medium bodied with a higher amount of carbonation. The mouthfeel is nice, but I thought the carbonation could be a little lower.

Overall I thought this was a pretty nice beer and I thought it was a nice example of the style, it had most of the aspects that I look for in the style and when it came to the taste and aroma I thought the balance was really nice and it helped this beer out. This beer had nice drinkability, I could drink a couple of these, especially when it's colder out. What I like the most about this beer is the balance and the milk chocolate flavors, to me those were the highlight of this beer. What I like the least ab out this beer was the carbonation, it would be a little better if it was toned down some. I would get this beer again when looking for a solid stout and I would recommend it to anyone looking for the same. All in all I liked this beer and I thought Alaskan brewery did a good job with this one, but it was slightly rough around the edges when it came to the mouth feel. It's not a favorite Alaskan beer and it's a solid example of the style. Nice job guys, this is a solid and tasty stout, keep up the hard work.

Up front malty, boozey taste. Following are hints of coffee, nuts, dirt. Something slightly sweet and sticky, but I had to really feel for it.

Overall, nothing great; nothing terrible. Middle of the road stout. Okay for a oatmeal I suppose. Worth a try, especially as an entry into the style.

This stout beer has more flavor than many imperial stouts, and is certainly more balanced. One of the most well-rounded beers I've come across. It knows its limits and displays its in class and mastery through its minimalism and evenness.

To me this beer is a champion of the style; bottomless, robust flavor, elegant, pragmatic, restrained, esoteric. One of the best single stouts out there. Compare to North Coast or maybe even a Sam Smith.

This will definitely be one of my go-to stouts from here on. Amazing complexity and balance for what is essentially a year-round, no-frills, offering from Alaskan Brewing. Alaskan has been consistently putting out some amazing beers with minimal fan fare. It is such a shame that there hasn't been much discussion or appreciation for this brewery. Onto the beer itself...
Poured from a 12oz bottle with a best by date of 5/11/16, so about 2 days away from its expiration date. Purchased this as a single bottle from Total Wine; it was kept out in the open; exposed to the elements. This being a dark beer, should hold well. Let's find out if that is true.

A - Pours a dark brown, with 2 fingers' width of light brown head.
S - Espresso, mildly roasted grains, milk chocolate, dark fruits, and sweet-smelling cigar. This is super impressive for a beer that is *only* 6.2% ABV - a shelf stout.
T - follows smell. Starts sweet, with a hit of caramel toffee transitioning into espresso with milk and melted chocolate. Dark fruits lurk in the background. Very impressed.
M - Medium as is to be expected in a stout of this size.
O - One of the better choices as far as readily available stouts go. Imperial or not, this stout should satisfy most palates. Highly recommended!