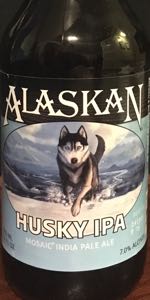 Notes: Alaskan Husky IPA is based on a small batch SMaSH Mosaic IPA recipe using a single malt and single hop to explore the specific desired characteristics of certain malts and hops. Hop varieties are often best known for either bittering properties or for high aromatics and complex flavors. The Mosaic hop is an example of a hop that can bring both elements to a beer.

Alaskan Brewing Company – Husky IPA
Appearance: Poured into a tulip glass. 3 fingers of nice white, kind of rocky foam. Reduced to about 1 finger and slowly reduced to about a half. Goldish in color and slightly hazy but you could see through it. Some decent carbonation was rising up. Some lacing as I drank it down
Aroma: Hoppy nose with citrus seeming to me to be the main character. Some piney notes in the background with a slight pungency.
Taste: A nice mouthful of hops but it was not over powering. There was more of an after burn with the hops as they lasted a while. Subsequent sips gave me more taste of hops.
Mouth Feel: Medium and slick.
Overall: To me this a good IPA. Reasonably priced ( I paid $8.99 for a 6 pack of cans) and if you have a taste for an IPA this is a good one to try.

I’m personally a bigger fan of big, bold, in your face IPAs, and I’m much more attracted to a New England style IPA than a more West Coast IPA, so this was not my favorite IPA, and I knew it wouldn’t be before I even checked out at the liquor store; but it was good. It was a bit mild for my taste, but the carbonation was on point, if anything it was just a tad light but nothing very noticeable. I definitely got quite a bit of citrus, specifically grapefruit off of this one, it was just light enough to not make your face pucker; but strong enough that you really don’t have to try and “look” for it. The color was definitely a clear yellow, with a small head, it’s been a couple of days since I tried it so I can’t remember ALL of the little details of it. All in all, it was a good beer, just not my style. I found nothing undesirable about it as far as it being poorly brewed, or stored, or that it was just bad. Just not my style. I would recommend this to someone who maybe doesn’t tend to like IPAs, or is maybe new to the IPA and craft beer world. I think this is just mellow enough to not offend, but strong enough to kind of open the door for what to expect from other IPAs especially Hazies and other Eastern brews.

From the can, it pours a clear yellow color with a large white head that slowly diminishes and leaves lacing. Citrus and pine in the nose. In the mouth, it is piney and a little citrus along with the malt.

This is a hoppy IPA. Almost like a pilsner mixed in with it. Pours gold. Some nice citrus notes in here. Not the best ipa but I fucks with this.

Smells strongly of cedar and pine. Distinctly woody smelling. Some grapefruit but I get heavy pine scent.

Starts pot dry and strongly woody with a strong bitter zap to the tongue. Stays pretty much that, woody pine.

Overall a decent AIPA that is on the High side for biterness and dryness.

I had read that Alaskan brews were pretty good and this one did not disappoint. Paid $1.75 for a can. You can certainly smell the hops - that slight pine scent - upon opening the can. Poured a decent head. The flavor "popped" when I took my first drink. Well worth having bought and tried. It was a medium to dark amber color. Certainly worth having and getting a few more. Would could well with grilled burgers.

Pours crystal clear bright yellow with a large white head that falls away fairly quickly but leaves nice lacing. Aroma is faint citrus. Flavor is citrusy with a nice bitter hop finish. Feel is light and well carbonated. Overall a pleasant beer without any outstanding characteristics.

Okay IPA, but nothing to write home about. Pours quite yellow, almost a lager. Smell does not bring forth any distinguishing qualities. Taste is a little citrus, and aftertaste a hint of bubblegum, but nothing that jumps off the page. All and all, not a great IPA

Pours a very clear golden amber with a soft white head that dissipates fairly quickly. Aroma is pretty interesting really, hard to place but its like a funky smokey caramel smell with the expected piney/florally notes from the hops as well. Taste reflects much of the same with a very clean finish. Bitterness may linger a bit long for my taste but overall very good, even the wife liked it lol!