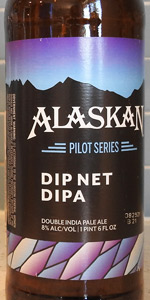 sturdy, woodsy, modern, and delicious. not a ton of new beers from these guys coming around lately, so i was stoked to see this one, they always go pretty aggressive with their hoppy stuff and that is most certainly the case here too, this is dry hoppy and juicy and vibrantly fruity in the aroma, but its also higher alpha and a little bitter in the flavor for a hazy, bold on both sides of the hop spectrum. slightly hazy in appearance, some density to it but it doesnt look sloppy, frothy white head from the tap, plenty of carbonation, soft orange tone. the nose is peaches, pine needles, and pineapple, not quite tropical, but not citrusy in the traditional sense either. simple cereal character from the grain underneath, just a little sweetness. the flavor is a little more dynamic than the nose, some northwestern pine and spiciness to the hops, maybe centennial or cascade or something like that doing some of the heavy lifting, but definitely a pineapple note which could be from mosaic, a lemon thing perhaps from an el dorado type, i do not know what they use in here though. it all comes together real well, i like being able to taste a little grain through the hops in a bigger ipa, but they keep away from nutty or sweet caramelized malt character which is a good call with this hop profile. maybe a little mango and honey late, some dank week being rolled, and then finishing bite and dryness. lots of body, but its soft, almost creamy, and it doesnt really linger. i do get some alcohol coming through, but it almost works to cut some body and its permissible in the style, not distracting here. overall a nice beer with a cool hop profile, wintery to me, nice for the upcoming colder evenings. good to see something new from alaskan!

Plush carbonation. Medium bitter aftertaste with the hot fruity notes lingering on the tongue. This is a highly sippable strong hoppy brew. From the 22 oz bottle purchased in the Northwest.