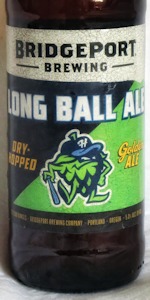 Notes: Few things go together like baseball and beer. So BridgePort teamed up with the Hillsboro Hops - Oregon's Northwest Minor League Baseball team - to brew Long Ball Ale. Dry-hopped with Meridian hops from the Willamette Valley, Long Ball is a golden ale with refreshing lemon notes that will leave you hoping for extra innings.
View: Beers | Place Reviews
Reviews: 16 | Ratings: 62 | Log in to view all ratings and sort

Poured from a bottle into a glass while listening to Blondie LPs.

I note that this has a 50% score on BA. Odd, as when I was drinking it I was overwhelmed by the averageness of this beer. It seemed calculated not to offend. It left me with a run-of-the-mill drunk. Charlie Brown would drink this beer.

Part of a summer sampler case, 6 bottles of 4 different beers. Poured in to a pint glass.

Pours a pale yellow color, a bit of haze, with a thin wispy head.

Taste is a lot like the aroma,, some cereal flavors, and lemon, with a dry bitter finish.

Mouthfeel is clean and crisp, with a bit of a chalky bitter aftertaste.

Overall a nice beer. I'm not big on the golden ale style, i'd probably prefer a pale or an IPA, but this is OK.

Half-opaque golden amber, not bright but not full either. In any event, a certain attractiveness to it. I'm thinking they should call it a Blonde instead of a Golden, if you catch my drift. Off-white head is foamy and somewhat thick, I really want to just suck it right off the surface like a puff of whipped cream from hot chocolate. Lace is present but not really noteworthy. The smell is fantastic, hop-forward but not strong. Spicy, piney, resinous, and vegetal much like with other Bridgeport ales. Palate is no surprise at all, balance favors these same hops, although a partly crackery, partly tart malt backbone, weak as it is, still exists. Dry finish but this ale is not overly bitter. Yes, there's more to hops than that. Beyond the hop qualifies already mentioned, the taste has citrus fruit, citrus rind, iced tea, and soap notes, and of course, one of my favorites, pepper (not always from the alcohol, my friends). It feels not too thin and moderately smooth, of light to medium body and mellower carbonation.

S: Can definitely smell that its decently hopped beer from the scent. Appealing, though a little sharp.

T: Hoppy and a little spicy at the front and smooth in the back. You can taste the citric elements toward the middle and end of your swig. Very flavorful in the beginning.

F: Bubbly and tingling on the tastebuds initially. Really punchy for a golden ale, which I find to generally be a little less robust.

O: Like Bridgeport says, this is a beer that I could see me drinking a few of at a ball game somewhere. Flavorful enough to keep me coming back for more and thankfully not so strong or hoppy that it wears me out too fast. Solid beer.

Poured from bomber into a pint glass

Appearance – The beer pours a hazy golden amber color with a one finger head of creamy white foam. The head fades over a moderate time, leaving just a trace of lace on the sides of the glass.

Smell – The aroma of the brew is very nice overall with a pleasant blend of lighter fruits of peach, pear, and apricot combined with some lemon and orange citrus. Along with these smells comes some lighter smells of a bready and grainy nature with a little bit of a grass and herbal smell as well.

Taste – The taste begins with a somewhat drier cracker and bready taste mixed with just a hint of a lighter fruit taste of apricot and pear. The fruit fades very fast and is replace by some grain and a bit of grass. As the taste moves on even further, some herbal and earthy hop tastes join the profile with the grass growing slightly stronger all the while. With a little bit of a citrus and with the drying out of some of the malt to an even more cracker like taste, one is left with a rather crisp and moderately hopped smooth hop taste to linger on the tongue.

Mouthfeel- The body of the beer is rather light and thin with a carbonation level that is on the higher side. For the crisp and more medium hop flavors of the brew the feel is great and makes for a refreshing and enjoyable feel overall.

Overall – I rather enjoyed this pale ale. It is somewhat lighter in hop taste (but not in nose; which was super nice), but overall a very enjoyable and easy drinking pale ale.

22oz bottle served in a tall pub glass. Beer pours hazy pale yellow, though forms a nice pillowy white head. Mild aroma of fresh, citrusy hops and grass. The first sip provides a rush of hoppy astringency, which is layered on top of a thin, refreshing body. The singular citrus note carries through the middle of the palate and through to the aftertaste. This is a really nice, enjoyable summer kind of ale. I'm glad i couldn't find any acceptable craft Pilsner at the store today -- I'd revisit this in the future, though I can't say it's a favorite.

Pours a hazy amber with a small head when poured from a growler. Lacing is evident as I quaff this fine brew. Extremely easy to drink with no major faults. Enjoyable and refreshing! Play ball!

12oz single picked up at the COOP.. Pours a slightly hazed straw golden.. short-lived 1/2" white head.. Clean pale malts on the nose punctuated by grassy hops and something that lets you know some PNW bitterness is coming. This is definitely a "NW Golden" good bitterness helps make up for the lack of flavor hops.. Light lemony hops as it warms up.. Pretty drinkable, but I doubt I will buy it again.

Part of me reached for this because of the Hillsboro Hops mascot on the bottle. What can I say? I'm the kinda sucker the marketing staff dreams about.

Just picked up a single 12 oz. Had no idea what to expect. Didn't know it was technically a blonde ale, but if that's true then it is one of the better ones I can remember having (and it's not a favorite style of mine). I plan on going to pick up a stash of this beer as I would absolutely drink it again. Hope Bridgeport considers making it a regular or, at the very least, a seasonal.

Look: The body is a hazy sun-kissed straw color (almost with an orange tint) while the head is white and recedes to a thick circular film. Light random spots of lacing.

Aroma: A little bit of malt sweetness is soon consumed by a clean spicy aroma from hops. Some dry grassiness works it's way in.

Taste: Very clean like the aroma with a wonderful spicy element. I want to say cedar planks, but it's a little less woody and more earthy dry hops. Hidden like a gem under all of this is a subtle little tropical fruit notion.

Overall: I enjoyed this the more I drank it. I purchased a six pack, and I'll be glad to drink them all. A nice summer brew with some nice flavors.

Quite moderate bitterness, though it certainly adds a pleasant zing to the Blonde style, or Golden Ale as they like to call it. The malt provides some warmth, but there is just a touch of sweetness. As a lightly flavored quaff, this hits the ball. From the 22 oz bottle purchased at Fred Meyer supermarket in Burlington, Wash.

A light and refreshing beer that delivers on balance, depth, and complexity. Low-key malt body and sweetness with a gentle toasted quality makes a nice base for the hop bitterness and juicy qualities that make up this brew. It does have a kölsch-like quality about it. Supposedly a one-time release, but it would be nice to see it return on a regular basis.

Pours two fingers of head on a cloudy pale straw colored body.
The aroma is pine and lemondrops. Nice.
The taste has a mild lemon bitterness throughout, some mild sweetness balances it out well.
The texture is crisp, a little fizzy.
A solid ale.