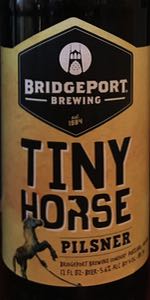 sad to think this could be one of my last ever beers from these guys, but i open it nostalgically and drink it down pretty quick. a little fuller than i have gotten used to in pilsener now, heavier, maltier, not sweet but sturdy, and it drinks more like an american lager than a classically styled european pils, at least to me. there really isnt a whole lot going on here, it just sort of tastes like beer. i dont get a lot of character out of the yeast, other than the beer being relatively crisp in feel, its not a flavor contributor to my palate. the grain really leads the way, some slightly richer breadiness to it, but still light and simple, and just a trace of bittering hops on the back end, not particularly interesting. its a basic beer, one that is a nice change of pace from the big hoppy stuff when the full bridgeport lineup is considered, but not one that stands real well on its own, at least in my opinion. american craft has definitely evolved beyond this type of lager now, and it tastes like a relic, sad as that is to say given whats gone down with these guys. drinkable but not at all memorable.

12oz bottle served in pint glass. Beer is straw yellow in color, and crystal clear. Might pass for mountain dew. Aroma has a bit of adjunct lagery sweetness, not nearly as crisp as I'd like in a pilsener (especially Czech pilsener). Flavor too, while not bad, has about the right amount of bitterness for the style, but not enough to compensate for the mild, but cloying, sweetness of processed sugars. The label from BridgePort claims Pilsen and Vienna malts with Willamette hops. More like Willa-MEH hops, amirite?? This is the clear loser of this summer's variety pack.

Front is a grainy, slightly bitter beer, that fades into slight earthy bubbles.

Taste Rating in Words: It's a dunk tank, all fun and games until she gets her hair wet.

Pours a hazy yellow with a small white head some lacing. Nothing noteworthy in the smell or taste a very forgettable beer. Mouth feel is a little more carbonated than I prefer. Nothing I'd ever recommend to someone.