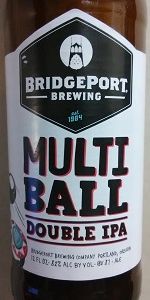 Poured from a can into a pint glass
Appearance – The beer pours a deep orange-copper color with a one finger head of white foam. The head fades slowly over time to leave a light level of foamy lace on the sides of the glass.
Smell – The aroma of the brew is mostly of citrus and floral hop smells mixed with a lightly toasted malt smell along with a little bit of rye malt. Along with these aromas comes some light notes of caramel and well as some other hop aromas of pine, herb, and earth.
Taste – The taste begins with a malty flavor being a mix of some toasted malt, caramel, and a hint of orange fruitiness. Along with these tastes comes a blend of hop tastes with citrus and earth being the strongest. As the taste advances the citrus gets a bit stronger, while the caramel and the toasted flavors fade a bit. While the later tastes fade some, more bready tastes meet the tongue and some rather strong hop tastes of pine and herb join the tongue to leave one with a sorta dank and malty hopped taste to linger on the tongue.
Mouthfeel – The body of the brew is moderate in thickness and creaminess with a carbonation level that is medium to slightly higher for a double IPA. Overall the feel was nice and made it easy drinking even with the more dank and malty nature of the brew.
Overall – A nice more dank and malty double. This is a rather nice brew overall. It’s too bad they are no longer in business.

Clean and clear burnt orange with a thin off white head.

Very dry and highly carbonated, sweet but has a finishing intense bitterness.

A decent DIPA, but this ain't no Hop Czar.

Bridgeport has done better. Double IPA lives up to name with plenty of hops taste on the back end..bitterness is prominent. Smell is dank, in a good way.

Appearance is nearly transparent copper with a moderate beige head with decent retention but minimal lacing. Aroma is floral and citrus hops. Taste is initially slightly sweet with a nice balance of malt and hops. Finish is slightly bitter and leaves a lingering bitter aftertaste.

Bottle from Albertsons. About what I expected. Dark amber, small tan foamy head, fades to small cap. Aroma is light caramel malts. Taste picks this up a bit, malt sweetness coming through, with some bittering hops at the back. Just shy of dank. Strong, but gets kind of medicinal too.

The flavor is sweet caramel malt with some fruit and mint and a big grassy bitter finish with some sharp alcohol. The mouthfeel is medium to full bodied with smooth carbonation.

Overall, kind of an odd mix of flavors.

Good DIPA overall. Did not expect much from this but ended up surprisingly tasty. Good malty start with citrus finish. Not too hoppy. Not too malty. Not too much of anything. But instead a great balance of flavors. Good three finger head when poured. About 10-15 minutes to settle. Great beer overall.

As a big fan of the double IPA, this was a delightful and unexpected find from Bridgeport. This beer I well balanced, not too hoppy , not too sweet, not too alcoholly. Strike is surprisingly clean like ale of lower gravity. Finish is a little woody and it is there that the hops show up and linger a bit. Very easy to drink. One of my new favorites. Recommended!