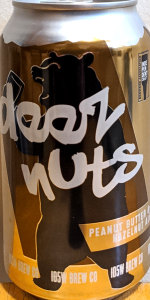 loved the nose but also can be considered a bit offensive for a lighter style ale. If this was on a stout i would find it more acceptable. that being said light nuttiness in the front falling off before the finish. Very light body for a beer with such heavy hazelnut smell. expected the flavor to finish strong with nuttiness was a bit of a letdown but for a lighter style ale with a nose like this i enjoyed it. not perfect but still worth a try.

drank and purchased with @osorojo

L: Clear dark red orange color with a medium white head and no lacing on the glass.

F: The feel is what really gets me about this one. The feel is just to thin for how rich of a taste this beer has, it just feels jarring.

O: Like the taste, I just think this would be better as a stout to get the creamier mouthfeel.

its a little over flavored, maybe some extract and not just raw nuts, but this is a pretty cool and inventive beer, unlike any i have had. its got to nuts in it i think, hazelnuts i am sure, thats the most obvious flavor, but also maybe some peanut in here, theres something a little more oily and earthy than the hazelnut. the base beer is designed just right for the nuts, loosely an english ale, but with the malt base more of a dubbel, its rich and layered, more complex than any english beer i know (save the yorkshire stingo right?!) just in the malt base alone, and then add in this heavy hazelnut and you have something quite awesome. its odd in a beverage, almost more like a spreadable flavor to me than a liquid one, but i like it, and its about as well done as i would expect something like this could be. its cool to have more than one nut in here, it rounds it out and makes the hazelnut not too much. i like the little bit of sweetness here in the grain, molasses notes, slightly lighter than that, but its needed to balance the earthy nature of the whole thing. i like the body, and am shocked to learn its so low in abv! a very clever beer, somewhere between a gimmick and a masterwork, but closer to the latter. one of the more interesting beers these guys had going...