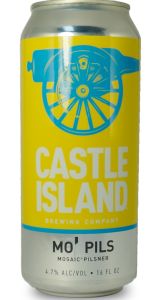 Let me preface this review by saying i generally do not like pilsners and lagers. Not my jam. So here is the first pilsner review I've ever done.

Look is clear and golden like a normal pilsner.

Aroma is sweet hops with some dough in the background (not a traditional pilsner aroma).

Taste follows nose with sweet hops leading the way and some bready characteristics. Does not have that typical skunked or lager flavor to it. (Thank God)!...

Feel is clean and crisp like a pilsner is supposed to be.

Overall this is honestly this first pilsner that I would actually drink again. Well done!

Pours clear, gold in color with ¼ inch head. Taste is dough, grass, with a nice honey/white grape juice sweetness on the finish. Medium-light bodied, moderate carbonation, crisp and sweet. Makes for an interesting and tasty summer sessionable beer. I could have several of these. Really liking what Castle Island has been producing.

Castle Island has been doing pretty damn well for themselves of late, with a lot of high-quality new beers and an expansion at their Norwood home facility. This beer is one I bought a four pack of last month but somehow never got around to reviewing. Gonna fix that right now, however. Mo' Pils is a Mosaic-hopped pilsner beer clocking in at 4.7% ABV.

Pours a medium golden color with straw-yellow highlights and a rocky, uneven head formed of bumpy, white foam bubbles. Lacing is kind of on the spotty side, though it's consistent in that it shows around the edges of the glass pretty uniformly. Languid carbonation rises slowly but evenly from the bottom of my glass. Not amazing looking but also not bad at all.

Nose is floral, catty and slightly funky like any good Mosaic-hopped, pilsner-base beer would be. I get slight notes of tropical fruit (guava and pineapple, mainly) plus some grassy and herbal qualities now and then. Mostly, this smells kind of dank and almost melon-like with some honeydew notes here and there. Slight berry as expected from Mosaic as well, but not as much as some beers with a darker malt complexion. Kind of goes all over the place at times. The light nature of the base beer definitely brings out Mosaic's herbal and floral elements, however. That is probably the best part about this beer; it doesn't use Noble hops, but it still somehow smacks of them, at least in a tangential sense.

Flavor is a little more biased towards the malt side of the flavor spectrum, with some crackery grain flavors and a little bit of herbal and dank hop towards the finish. A bit more boring on the palate than expected. A tad bitter on the back of the tongue with some slight gooseberry, guava and white grape flavors. The swallow is punctuated by grassy hoppiness and slightly toasted malt character.

Crisp and solid carbonation builds atop a decent base beer that could probably use a little more definition. The malt flavor is pretty plain; it's pretty clear this is trying to be a vehicle for the Mosaic, but it just seems to buckle under the weight, and presents more favorably in the nose than on the tongue. Though it's a fun drink and plenty refreshing, I'd like to see it with some deeper flavors. Then again, Mosaic just isn't my favorite hop to use by itself. It feels unfocused here and doesn't feel supported by the base as well as it could be.

A: The beer is a light gold color, with a short white head that fades slowly and leaves a thin lace on the glass.

T: The taste starts out bready with flavors of lager yeast and a hearty but not too heavy malt character. Then a strong hops bitterness for the style comes in. Some mildly sweet flavors of citrus and caramel bring a good balance. The after-taste is slightly hoppy and slightly bready.

O: Tasty, goes down easily, not too filling, mild kick, good representation of style, this is a solid beer to drink for a while.

What an easy drinker by Castle Island. I'm always excited to see a brewery crossover from ales to lagers...and even more impressed when they pull it off. An aroma of floral and citrus hops bursts from the can followed by a doughy malt. Straw gold hue that's more clear than cloudy. Nice fluffy white head sits atop the body and sticks around. Taste starts off a crisp, doughy pilsner with lightly toasted grains and then transitions to all Mosaic hops for the next 70% of the sip - floral and slightly pungent citrus (guava) followed by orange and tangerine. Drinks real clean and real easy. Snappy finish from the perfect carbonation. Goes best with sun and warmth.

It's a good Pils. Some grain, grass, earthiness, papaya and citrus rind. Nice bitterness. This is all Pils up front and finishes session IPA. Pretty good.

Looks like beer, smells like Mosaic hops and some bread notes. Taste is very similar to the smell, just more intense - more pils malt, more Mosaic, a little bitterness but its balanced in comparison with everything else. Tasty, light, clean, you could crush these all day.

16 ounce can from the brewery, canned 2/9/17, imperial pint glass.
Crystal clear pale yellow pour with a short-lived ½ inch white head.
Bright citrusy nose with floral notes says that this is not a typical pilsener.
Taste is crackery malt with a big dollop of citrus, especially tangerine rind. Long, bitter citrus pith finish.
Mouthfeel is pretty substantial considering the low ABV. Pretty crisp carbonation.
I loved this spin on the pilsener style. Even the SO who tells me that she “hates pilsners” likes this one (no noble hops may be the reason). I’ll buy more of this one.


Mosaic Pils from Castle Island Brewing Co.
Beer rating: 87 out of 100 with 33 ratings