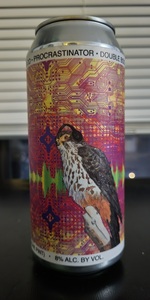 On a hard pour, 1 finger of fine khaki head forms, then reduces to a ring around the rim that leaves some lacing. The body is very dark and in normal lighting essentially pitch black. Up to light a faint dark red does come through.

The aroma is pretty close to a traditional doppelbock with some very chocolatey notes added. Some alcohol character mixes woth the chocolate to make quite a nice sweet dessert aroma. Almost has a barrel aged character but not quite I'm sure qthis would be good put in a barrel. Dark chocolate galore. Some nice lager notes.

The flavor is very similar to the aroma with more dark chocolate everywhere. The alcohol doesn't translate directly to the taste, but rather is an extention of the aroma as you breathe out after your sip. A slight roasted/lager bitterness melding but not a lot of hops as per style, but this is not traditionally malty. I'm curious if this used any adjuncts as it tastes like it but before drinking I thought there weren't any. There are some nice roasted malt notes but there is a lot of roast and very sweet.

Feel is very warming and cozy from the high alcohol and chocolate vibes. The beer itself is surprisingly drinkable despite the high abv and loads of flavor. Not the thickest big beer but the malt does have quite a long and pleasant finish. It's a big beer with drinkability to the point its almost dangerous.

Overall this is a pretty dang good craft doppelbock. I'm unsure is sdjuncts we're used but I will look up the notes and post them after this review to get a better understanding. It's pretty close to tasting traditional but there's so much chocolate that I feel like I need to drink more German doppelbocks to get a better understanding of the style. It could be all malt but it definitely could also be cocoa.

UPDATE: the brewer's website is very vague and the whole description mentions nothing of the ingredients and process and just gives tating notes which include chocolate and rasins which are the esters that are quite beery but very sweet. Possibly some figgy notes.