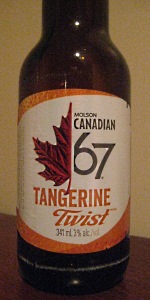 341ml bottle - a sneaky entrance into the market (maybe, since I don't have television, and its attendant ads), this one procured from the remainder bin at the local chain store instance.

This beer pours a clear, super pale, diluted ginger ale, um, colour, with one finger of weakly puffy, wanly foamy, and generally bubbly dirty white head, which leaves a few remote instances of isolated islet lace around the glass as it hastily abates.

It smells of rather fruity orange and tangerine citrus fruit, like a burst of well, Starburst candy
on the nose - like a gummi bear fruit salad (one that I wouldn't mind get to knowing), and little in the way of veritable fruit characteristics actually perceptible, just like anything else (you know, like malt or hops - just sayin') for the most part. The taste is weakly grainy and wheaty pale malt, a neutered, and rather metallic tangerine fruitiness, a stupidly noticeable hard water trait, and some subtle earthy, musty essences.

The bubbles are fairly frothy, and even a tad edgy, the body quite on the light side of anyone's idea of a weight scale, and not even all that smooth, a certain stony, metallic character seeing to that. It finishes a tad sweet, that lab-formulated tangerine starting to show its not-so-real boy cracks, and the pithy grainy malt hardly up for sweeping us off our feet at this juncture.

Just another attempt to capture the summer fruity drink demographic, released way too early to make any sort of dent in its desired market. Not really off-putting, and more or less another variant on the '67' calorie concept - though here, for some reason, their nutrition label claims 70, with a side label mention of the count being rounded to the nearest 10 calories. Cripes, this is just a bunch of weak-ass pedantry, misdirecting us from the main point - this 'beer' sucks, despite its attempt at trendy fruitiness.

I've been drinking way too much beer lately so for those days I don't want the calories or the alcohol, I've been looking around for low calorie and low or no alcohol beers to fill the gap... (what's with non alcohol beers costing almost as much as real beer too?)

As this is a Molson Canadian product I expected nothing and they only had the orange one so I gave it a shot... I am sooo not impressed... while better than the non-alch "beers" this literally tastes like someone took a molson canadian, mixed it 50/50 with some orange flavored carbonated mineral water and called it a beer...

While not completely horrid tasting... it was super weak and watery... if anyone knows of a decent tasting, low alc/low cal beer let me know because I would rather water down a guinness or some real beer than drink this 67 urine.

Seriously.. they must get some heavy molson canadian drinker to drink a case and then piss in the bottles, add a twist of orange and call that molson 67....

I guess the only reason you might drink this is to pour it in a glass at a party and pretend it is real beer... and even then it is so pale people would suspect anyway... it is sooo not worth buying