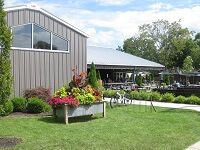 My favorite brewery in southwest Michigan. Love the vibe, beer, and folks who work there. Always a good selection with a wide variety of styles. Everyone is super friendly and they are very involved in the community.

4/22/21 Because of my "just okay" comment below for two beers I decided re-visit. Again we ordered three beers to try a variety. Two this time were well above average, Stone Fruit Mantis (foeder-aged) and Dead Winds (tequila barrel-aged). The third beer was just okay. Recommendation: Order the barrel-aged beers here. You're on your own for the rest.
****************************************
This brewpub is located along the main street in the downtown area. Curbside parking is available, and a large city lot is a half-block away. The pub is inside a large metal building that has a large covered (and heated) patio on the front. Some picnic tables are on the front lawn too as well as a fire pit. Overhead doors open up the interior space to the patio. A long L-shaped bar (no seating at the present time) is along one side, and several rows of high tables and some standard tables provide ample seating.

There are 20 taps but only 17 beers and one cider were available. They aren't serving sampler flights but they offer half pours. We chose three half pours in an effort to hopefully evaluate their beer offerings as best as we could. Whether we chose wrongly for an overall evaluation or not, we were not impressed. One beer (Floro Jelly Foeder-aged Sour) was outstanding, but the Melonhead Gose and the King Prawn IPA (NEIPA?) didn't live up to their descriptions on the menu and were just okay.

They don't serve food here but there is a vending machine with snacks. We visited on a Friday afternoon and a food truck had just parked at the curb in front, so food is sometimes accessible.

Based on the one very good beer that we had, plus the size of the beer menu, this place ends up with a decent score in this review. I'd go back again just for the Floro Jelly, but I'd also hope that some of the other beers are better than the two duds that we tried today.

Good start for a new microbrewery. Decent selection of low gravity beers, but had fewer high gravity beers. Not having fun foods like most microbreweries hurt. They were well organized for selecting and serving flights.