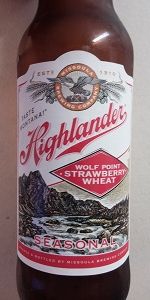 Notes: This is a full-bodied American Wheat Ale, infused with the essence of Strawberry. The American style wheat carries more malt and body, as compared with its German counterpart. It's a great beer for a warm Summer day. Give it a try with a slice of lemon!

12 oz can. Pours slightly hazy straw yellow with a small white head that quickly goes to a thin dusting that leaves little lacing.

The aroma is lots of strawberry with a little malt.

The flavor is earthy wheat wheat malt with overly sweet strawberry that seems fake and a bit of an odd chemical bitter finish. The mouthfeel is pretty thin and watery.

Overall, not my thing. Too much overly sweet strawberry and some odd notes.

Fairly opaque and dull golden amber, with fluffy, uneven whitish head of moderate retention. Natural strawberry aromas essentially overwhelm any grain or other character until it settles. Then, alcohol, grass, and green suggestions bleed through. Not so strong of strawberry on the palate, which makes for a good balance with tartness and bitterness floral, citric and grassy, from hops and to a lesser extent grains (definitely reminiscent of wheat). Dry finish, chalky. Medium body, alternating watery and smoothly sudsy.

Poured from bottle into a pint glass-

Appearance- The beer pours a hazy golden amber color with a one finger head of fizzy white foam. The head fades quite quickly leaving only a trace of lace on the sides of the glass.

Smell – The aroma of the brew is very strong of a strawberry jam smell mixed with some aromas of wheat. Along with these smells comes a little bit of grass and a hint of hay.

Taste- The taste begins with a wheat bread taste infused with a light strawberry sweetness. Along with these tastes comes some flavors of grain and a little bit of hay. As the taste advances the strawberry gets slightly more intense, but never really to a level that is obnoxious. With a little bit of a grassy taste comes at the very end, one is left with a rather easy drinking and crisp strawberry wheat taste to linger on the tongue.

Mouthfeel- The body of the brew is very light and crisp with a carbonation level that is rather high. For the moderately light and wheat tastes of the brew the feel is rather nice and creates a rather easy drinking and refreshing brew overall.

Overall – A decent fruit beer overall that has a nice light and refreshing strawberry taste.