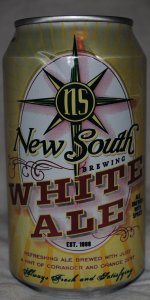 Notes: An American interpretation of a classic Belgian wheat ale. A hazy light golden color gives this beer its name. This light and refreshing ale is brewed with just a hint of coriander and orange zest giving way to a citrus finish.
View: Beers | Place Reviews
Reviews: 37 | Ratings: 104 | Log in to view all ratings and sort
Reviews by thehooksman:

Poured from the tap at Pearlz Oyster Bar in Charleston, SC into a shaker glass.
Aroma- Citrus, coriander and some floral notes.
Appearance- A light murky yellow color with a medium sized white head.
Taste- Lightly flavored with citrus and maybe some coriander
Palate- A light bodied beer with moderate carbonation.
Overall- A beach beer, and for what it is made for it ain't bad.

Not too shabby, need a little more though...

Hazy pale straw colored with a dainty white lace.
A citrus tang touches the malty nose over a light frothy body.
Starts out a bit mild and carbed, but moves quickly to a nice wheatiness. Slight esters give it a sweetness that is similar to the aftertaste of an orange, maybe?
Finish is long and the wheat shines through to the end souring slightly as it goes.
Closer to a definite style than their usual.

Appearance - a slight haze to this golden lemony beer. A standard white cap hangs around for a minute before evaporating down and holding at a thin cover.

Aroma - dusty, powdery grain. A slight whiff of sweetness. Whether that is due to the grain, hops, or something else, I can't tell.

Taste - refreshing, clean malts. Complementary flavors of orange and coriander provide some character without getting very sweet or heavy. Clean on the swallow and finish, carbonation cleansing the palate somewhat.

Mouthfeel - light but with a note of smoothness. Good crispness, well done.

Drinkability - an easy session beer found locally on my trip to Myrtle this summer.

I have been wanting to have this one for a while. Finally got it on tap at the Kickin' Chicken on James Island. I saw the beer and wondered why they called it a White Ale. There was nothing white about it, other than the head. The brew itself was actually a light amber color. I thought they had brought me the wrong brew. They told me it was the right one though. The brew's smell was quite fruity, mostly of the citrus origin. Along with that, there was the light hint of the hops. The taste was a little bit different though. I thought it had a bit more in the area of the malt area with the citrus undertones. I figured this one would be great with a slice of orange in it. All in all an ok beer. Not really a Witbeer or White Ale, but a good beer none the less.

Appears a light, cloudy haze of light gold with a small white head that fades quickly. Tiny bits of lacing are scattered but seem to fade quickly as well.
Smell is of crisp wheat with coriander and citrus lingering.
Taste is of the same aromas with some pleasant spices that makes the taste good but there is no "wow" factor, which sort of holds this one down from being in a higher echelon.
Mouthfeel is of a medium carbonation and light brew with mild wheat and subtle citrus and spices with just a touch of hops. Very delicate and good in my opinion.
Drinkability is good. This is the choice for drinking outside in the Myrtle Beach and surrounding areas during the summer.

Pours a cloudy gold wheat with very little head. Yeasty, citrus flavor very typical for a hefe. Very light tasting hefe, not watery but lacking full flavor. Very light spice that the brewery claims. This reminded me of a light hoegaarden. Not bad, but not great.

The ale arrived looking weak - a very light off yellow color, extremely cloudy and some wisps of a head (if you can call it a head). My nose twinged on the unbalanced aroma of citrus, like an orange peel was under my nose. I was somewhat surprised that the citrus provided some decent tartness on the tongue but the ale seemed a little off balance. The malt was way behind the tartness. No crispness. After a few swigs, I lost interest and didn't even finish it.

I wanted to try this at another establishment, but did not find it on the rest of my trip. I left questioning the age of the keg or whether I received a first pour of the day as everyone had a bottle of bud in their hands. But this tasting was unimpressive for what should be a crisp and refreshing ale.

Tangerine in color with just some slight haze. Nose was just hitning at some spices and wheat but not much else. Flavor was a bit understated and a tad metallic actually. Slight tints of wheat. Overly understated and unexceptional. Good enough in a pinch but I was happy to move after my single pint. Mouthfeel was light and had a metallic ting to it I thought. Not particularly fond of this beer.

This was a gift from Beav42 and it took me a while to get a picture approved. Now that it has been, I am ready for another CANQuest (TM) beer. Thanks, Dave!

The Crack revealed yet another craft CAN filled near to the brim! The Glug produced a thick, dense finger of bone-white head with good retention. Color was an extremely cloudy golden-yellow, very much like fresh-squeezed grapefruit juice. Nose was both spicy and orange citrusy. Mouthfeel was slightly thin with a light presence of the spice and zest noted on the label. It seemed a bit muted and could use tweaking. Finish was pleasant and certainly refreshing, but I still feel like its flavors were somewhat muted for the style. It would be worth CANsidering for the cooler on a hot, humid summer's day.

A little bland for my tastes compared to other more true representatives of this style, but slightly spiced, smooth and easy to drink. It went down easily after a hot day on the golf course. At $10 for a pitcher, the price was right.
A good session beer, but nothing outstanding.

Hazy apricot pour with a dense, but brief head of white. Large, cascading bubbles allows for a thin veil to remain.

Flavor is decent, but nothing out of the ordinary. Sweet citrus and slightly tart wheat flavors along with powdery fruit and spicey coriander.

Smell: A light maltiness hinting a faint sweetness in the nose and just a touch of a honeyish quality.

Taste: Particularly pale maltiness with a trifling wheat character and a hint of honeyish sweetness. Low coriander and, here we are, waiting for some citrus that never really presents itself. Still, a light maltiness, a light pinch of coriander on the sweetish finish.

Overall: It's light, lacking and it's only real fault is it's friggin' boring, BUT, it's a beer from Myrtle Beach sold in Myrtle Beach -- it's hot, it's sunny, and, damn, these people need refreshment, so that's probably what it's going for and I won't begrudge it for that.

This citrusy-spiced wheat beer has got to be a hit at the beach! Where temps are high and the sun is strong- its these conditions that beg for these highly refreshing Witbiers. But does their own locally made brand hold up?

As the ale pours, its exuberant turbulence builds into a lathery and sprite separation of foam from ale. With a murky golden body underneath, its head is loosely knit but also looking like structural sea foam. Eggshell white in its stain, the beer's head falters sooner than preferred and leads to minimal lace.

Musty wheat aromas are deeply earthen with tones of grain and sod. A quick reprieve of citrus and spice wash over the wheat and barley for a refreshing orange and coriander brightness to save the day. Lemons, sulfury apples, and wet hay give final impressions as I take the first sip.

Its grainy-sweet taste is partly of dried barley but also of bready wheat. These malts allow for a fruity and spicy balance to play out overtop with all the citrusy flavor that the nose suggests but leading with dried bitter orange peels. That's all counter to soft coriander, white pepper, and a tinge of clove. The taste closes with spicy bitterness of grapefruit pith, straw and a smack of cast iron-type minerals.

Light on the palate, the ale has a zingy white wine character from its lifting carbonation and its Belgian-esque acidity. Becoming playfully fruit, the ale weakens considerably in the middle and leads to a somewhat watery finish that exposes just enough grain-derived astringency as it does hop bitterness or yeast spice. Its understated warmth is lightly minty while coriander provides echoes in aftertaste.

I rather enjoyed this "fun-in-the-sun" type of beer, even though a few glaring weaknesses play out. But outside of "critique mode", this ale would really hit the spot on those hot summer days by the sand!

Picked up today on a whim at the Beer Dispensary in Apex. Pours a pale straw color and the head never really develops and instead just caps right away. Nose is grainy with a hint of orange.

The pieces all seem to be present in this one but it just doesn't pop. I get the wheat, the orange peel, the coriander, the yeast but they just don't mesh quite right. Mouthfeel is missing that Wit delicateness. It's not bad, just pedestrian. Carbonation is there initially then totally deserts the brew.

Not terrible but not something to take a road trip to Myrtle Beach for.

Okay--Very similar to Blue Moon. Not a lot of taste. Taste a bit of Clive and pepper and not much else. Works on a hot summer day. Not one of my favs.