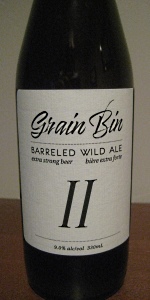 I've been waiting to try something from Grain Bin, as it's not really close to where I live, despite being in the same province. Thankfully my local craft beer store had me covered. I like what I've seen and heard from this brewery--giving the people what they want through their "Democracy!" theme. I mean, they even let "the people" (via their social media) choose what type of hops to use in their beers. It's a pretty cool idea.

Apparently this is to commemorate their second anniversary. "Barrelled" but I see nothing on the bottle about what type of barrel said barreling occurred in. Their website is pretty scant on info, as well. (After checking their instagram, it looks like oak.) Oh well. Let's crack this thing.

A simply labelled 330ml bottle. Super aggressive carbonation, and cracking the cap I was dismayed to see it spill over the bottle quite quickly before I could pour into my tulip glass. The angel's share. It's a dark caramel colour, and with a wonderful, small-bubbled creamy head that sticks around and leaves some nice lacing. Looks nice man.

Now THAT is some fruity goodness. Huge hits of green apple right up front, mango and citrus (lemon, orange peel and lime) appearing after. It instantly reminded me of the days when I was drinking Unbroue beers--it's got that wild, fruity and funky yeastiness. Tons of funk on this one. Also that bubblegum nuance I love in some of these wild ales. Pineapple and plenty of tart candied aromas. It also reminds me of backpacking in Belgium and coming across some absolutely insanely yeasty beers there-this is bang on for a wild ale. Absolutely heavenly aroma.

Taste is about what I'd expect. A nice immediate tartness, lots of green apple, some lime and pineapple notes, and plenty of pear. The malt is also there, adding a nice biscuity flavour, but the yeast is king here. All of that funky goodness--this rivals the the Belgian and French beers I personally have tried. Some bittering hop oils show up in the finish, and it tends toward dryness. Fantastic. 10 years ago I never would have imagined such a beer as this would be brewing in my own province. Really, really nice.

Mouthfeel is creamy and medium bodied. DECEPTIVE with that 9% abv. The alcohol is faintly detectable in the aftertaste and the warming sensation, but I would have never guessed this was above 6%. Magnificent.

Stunningly good. I may be forced to pick up a few more bottles of this and cellar them for a few years. Well done, Grain Bin.

330ml bottle - I guess I missed out on the 'I' release. A brew to commemorate their second anniversary, with no indication of the type of barrel used.

This beer pours a hazy, medium copper amber colour, with two fingers of puffy, loosely foamy, and bubbly tan head, which leaves a few instances of cannonball splash pattern lace around the glass as it quickly blows off.

The carbonation is adequate in its palate-satiating frothiness, the body a decent middleweight, and mostly smooth, once you get accustomed to the robust tartness abounding here. It finishes off-dry, the fruity essences showing some lingering moxie.

Overall - this comes across as a very well-made version of the style, nice and balanced, and pretty easy to put back, especially given the totally integrated nine points of the ol' wowee sauce. Congratulations on your first two years, and I hope that there are many more to come!