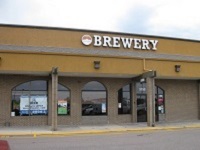 Store front brewery in small shopping plaza. Angled L-shaped bar in the right hand corner seats about 15, with additional tables about the room and a deck out back. A dozen beers on tap, I very much enjoyed the Delta One Bravo. Very laid back place, food truck.

i had no idea this place was even here, been open nearly a year too! how did i miss this one? anyway, its a neat space, looks like it was put in where an old steakhouse or something was, prominent wooden features around the bar, several different seating areas, and a completely exposed area where the fermenters are chilling. its an odd vibe, like they havent fully grown into the space yet, but its comfortable and mellow. they had an impressive list of beers, maybe near ten or twelve in total, and with quite a few different styles, something for everyone here. all the beer was decent, the ipa was the worst of the lot, but both the stouts they had working were excellent, as was the octoberfest. we kicked it at a high top, played games, and ordered in a pizza. service was attentive enough and real friendly. this will become a good neighborhood hangout down here, the beer was not at all bad, and somewhat inventive too. seems like an odd place to start something like this, classic strip mall brewery, but they should do well if they keep it up. ill swing back through for a beer when i am in the area again.

(#36 of 49) The brewery is located in a strip mall setting with ample parking at the front. The interior has a nice pub feel to it, and the brewing equipment is visible along one wall and at the rear of the place, with the bar in between. Several TVs are installed above the bar.

We came here to try the beers (there is no food other than snacks), so we ordered a sampler flight of 8 of the 11 beers that were available. Each of them was brewed above their respective style characteristics so that we scored them in a range from 3.5 to 4.25 (the BBA stout), with an overall score of just under a 4.0 grade.

Although there is no food served, the brewery is food friendly. A couple of restaurants in the strip mall have carry-out/delivery service, and menus for these places are available in the pub. We enjoyed this place and would visit again when in the area.

Halfpenny Brewing Company in Centennial, CO
Brewery rating: 3.45 out of 5 with 4 ratings