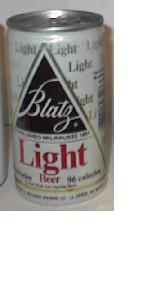 I got a good date on this one. Best by December, 2019. Site says this is retired but it is now being brewed again.

Smells a lot of cooked corn...I don't particularly like the aroma.

But wow I kind of like the flavor of this. Fizzy and light bodied as you drink it but with a good up front sweet corny taste....at the end there's a touch a dryness that creates a bit of harshness on this finish.

This is not bad at all. A bit too fizzy and carbonated. Definitely corn laden. But to be honest it hit the spot after work tonight and the can was gone in minutes. I'm cracking another. Does not have any off or flavors I would associate with cheap beers.

Clear yellow with a thin white head with poor retention and spotty lacing. Smells like grain and not much else. Same for the taste. Thin and watery with no real aftertaste. A dud.

Got this one out of the mystery beer machine at the bowling ally in Evansville, WI.

This isn't a very good tasting beer. I drank it from the can, but I imagine it's a pale straw color. Not a very discernable smell. Taste is average at best, pretty grainy. Mouthfeel is OK, but very light. I wouldn't want to drink too many of these.

Got this can from a buddy, so I said I would review it.

Color is a clear yellow. Pours a thin white head. Very light and it fizzles down very quickly, leaving no lacing.

Smell is very grainy. I really couldn't distinguish any particular hops or malts. Taste is the same, just grains. It has a very bland flavor that relates to the typical American Macro Lagers (light).

Mouthfeel is very crisp in an uninviting way. Goes down somewhat smooth.

Overall, this is a pretty easy to drink beer, because it is so light, however I really wouldn't want to drink a lot of these.

This review is part of the Macro Smackdown series (MacSmack XXII), my periodic side by side comparison tasting of macro lagers and light lagers. I enjoyed Blatz in my youth and am interested to see how it tastes now. Since I still haven't found the real deal, this light version will have to do for the time being.

Pale amber that is several shades lighter than its competitior. The head is vastly superior, however. It's eggshell white in color, has a great deal of character and is leaving a better than respectable amount of lace. This is a very nice looking light lager.

Blatz Light's nose isn't too bad, but it's the clear loser of this portion of the competition. The beer smells sweetish, with a corn and husk vibe that is tolerable at best.

Unfortunately, the flavor profile is all too typical. It's coarse and grainy, with a mild musky hoppiness. It tastes like a low alcohol version of malt liquor without the sweetness. Given the calorie counts (110 vs. 92) and the carbohydrate counts (8.3 gms vs. 4.8 gms) of BL and GL respectively, the final flavor outcome is surprising.

The mouthfeel is light (almost watery) and is somewhat roughly carbonated. It probably wouldn't come off so bad if it wasn't being compared to one of the best mouthfeels (light lager division) in the universe.

Blatz Light isn't terrible beer, it just had the misfortune of running into the best version of this style to have ever entered my glass. What are the chances that the non-light Blatz will live up to my fond memories? No, I didn't think so. Pabst has quite a few MacSmack crowns on its mantlepiece. Not this one, though.

24 Hours of Nine Mile - Mountain Bike Race
Wausau, Wisconsin
This lovely can was left in my cooler.

Appearance - Golden brown pour with a head that sat 2 inches high. The head faded after a few minutes leaving a white cloud at the surface if the pint.

Smell - Theres a grain scent but not really strong. There are not hop or malt aromas here.

Taste - Not much to describe here. There's a 'beer' flavor but nothing complex or original. I equate it to a Miller Lite as far as taste.

Mouthfeel - Feels like carbonated water with a hint of graininess.

~ The best part about this brew is watching it get poured. After that, you're on your own. Don't get me wrong. I'll take all the freebees ya wanna give me but you'll never see this one on my grocery list.


Blatz Light from Pabst Brewing Company
Beer rating: 66 out of 100 with 16 ratings