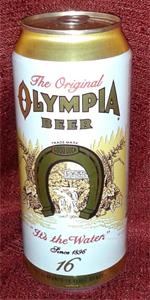 "It's The Water" -- "Oly" as it's called is famous for it's water source, artesian wells, which are aquafers first named in Artois, France. Olympia itself carries the name of the town it's brewed in -- Olympia,
WA. The standard joke is that "it's the water" that makes you pee, and pee, and pee . . . along with the other jab, "You don't buy beer, you only rent it."

This stuff is pretty generic, unremarkable, macro-brew. Way back in the day (1950's) it was the women who drank Oly, and the men drank something with more body. It's as close to water as you can get and still be carded for proof of age.

On the bottles the labels used to have "dots" on the back. A "four dot" label was traditionally viewed as a sort of coupon for sexual favors. That's the tradition. Actually, the dots note which bottling line the bottle in the brewery rolled off of. There were four bottling lines.

ALL my relatives, and there were a lot of them, drank Oly. There was once the remark at a family gathering, circa 1964, that when my family stops drinking Oly, the brewery will go out of business. Ironically, most of my family has passed on, and the Olympia brewing company was bought out by Pabst.

When I was in the military, 1960's, Oly was offered at the PX on the west coast bases. I associated it with "home" and so my brand loyalty grew out of family association and nostalgia.

It's still nostalgic. The brewery in Olympia, WA actually has preserved and maintained the waterfall and bridge depicted on the label.

It passes for beer. But mostly it's all tied up in a lot of family memories.

L: Pours as a classic lager, golden and translucent. Solid inch head fades after several minutes
S: Smells slightly juicy, definite hops and hints of citrus- aroma reminiscent of a hazy IPA
T: less hops and more malt than the aroma would suggest
F: Gentle on the palate, light and thin
Overall: A water of a beer but one of the better waters out there. Quite a bang for your buck if you seek macro-cheap beer

12oz can stamped JUL 1320 poured into a Pabst thumbprint chalice at fridge temp, no ABV listed on can. The beer pours bright gold in color with nearly white head. The head recedes to a thin ring and single layer of bubbles. The aroma is faint with just a hint of unmalted grain and dry ground corn. The taste is slightly sweet and tangy grain with a little dried corn and barely there sulphur & diacetyl on the mildly bitter finish. The mouthfeel is thin bodied with average carbonation and a somewhat dry finish. Overall, ok to good. Not a lot of taste or flavor here, but what's there is pleasant if you're just looking for something to wash down food or drink with friends.

Continuing to run through macros...

Is this really “better” or “worse” than the other adjunct lagers? I supposed. At least its drinkable. Some must. Some grain and corn. Finish the job!

It's been a little bit of a while since the last time I had this brew. Would rate it just a touch above half way between poor and average. Was an ok tasting beer, but not one that I would seek out.

Olympia can vs Bud bottle

Both poured in standard pint glass before best buy date. They have similar aggressive carbonation and clear pale appearance. Oly a shade darker than bud and has about half a finger more of head and better lacing

Not alot of smell for either, mainly pale malt & corn with hops for oly and the other smells like sweet grain with no hops

Easy drinking AALs one rice the other corn for adjunts. Oly's hop profile is definitely more pronounced which makes sense as head retention is better. Bud is sweeter but not so sickly sweet as other chepos, still refreshing which is surprising that it has no corn. Even tho, olys better bitter nearly outweighs buds malt rice and hops.

Between these two macro lagers pabst brewed olympia has a little more to offer than Bud. It's got a noticeable hop bite where for any AB product you almost cant even imagine any hops. Questions come into ingredient quality, who has the cleaner barley, water, etc?

I bought a 12-pack in Berkeley for $7.99, which is a good price here. It's not good beer, but it's drinkable and the price is right. I'd rather drink Olympia than Bud, if only because the price is lower.

For what it is, a cheap, drinkable lager. It's delicious compared to beers like Rainier, PBR and the like.

Purchased a single 24 oz. can in Seattle on the last night of our 8 day trip to NW. Had spent a pleasant day adjacent to the old Olympia Brewery in Trumball Falls last Thursday.
Now brewed by Pabst.
This poured a pale straw yellow with a full all white head that did not last long.
AROMA: Grain, grass perhaps a faint not of resin hops.
TASTE: Decent, along the lines of a PBR.
It's an economy beer and is better than a lot of the low priced beers out there.

It's my parents beer, trips to the brewery in Olympia with samples. With it stayed true to the original, and the brewery is shut down? What happened to the malt?

As far as cheap beer goes, I would say it's my favorite. By no means would I call it craft beer, but for a nice cheap simple beer, it leaves others like Budweiser or Miller in the dust

I could get this around here, back in the day, though even then, I had to hunt it out. Better than average AAl for a decent price. I wish to find it again, hello, Pabst!

Olympia pours slightly darker than straw. Just about as gold as the horse shoe on the label itself, shining brilliantly clear, and capped off by a foamy bone white head that lingers on the surface and coats the sides of the glass in sheets of lacing from top to bottom.

There admittedly isn't much going on in the aroma. A bit of corn, a floral note, maybe a blade of grass or two to cover up a minute dried piss like scent.

Similar lack of flavor present. Again with the lightest notion of a blend of rice and corn, and perhaps another blade of grass was sacrificed for the sake if the taste.

A burst of carbonation runs champagne like through the mouth. It favors sweetness and persists in clingy fashion before giving itself up to a very dry and mouth foaming finish.

This is surprisingly better than I had remembered. It's very easy to drink, and it is quite beautiful looking. I can totally imagine pounding these all day in the sun, or hanging around a dive bar catching some good old live punk rock tunes. For people to give this 1's and 2's, hell even 3's across the board clearly doesn't give a shit about reviewing to style. That said, this is a pretty damn decent AAL. Cheers.

I call this fun time beer, because every time I drink it I'm usually having a fun time outdoors and not thinking about beer or attenuation or ibus or whatnot.

Pours a very pale golden color with a thick foamy white head that actually stuck around. Not a lot of visible carbonation.
Smell was sweet, bready and corn like.
Taste is similar to the nose with a very light white bread flavor. There is a bit of sweetness in the flavor as well with some corn flavors.
Mouth feel is actually very light and has a somewhat wet finish in the back of the mouth.
This beer actually was leaving some lacing on my glass! I liked this one for one of those beers that would be served ice cold on a hot day. I can really see this as being quite refreshing.

12 FLUID OUNCE can
Served in a Busch goblet

This beer pours a brilliant golden color and is topped with an inch of white head that settles quickly to a thin layer leaving little lacing.

It doesn't have a lot of aroma. It has typical sweet grain aromas albeit subtle.

It has a mild sweetness with some grain and floral hops.

This is an easy drinker. Does Pabst just can all these regional rust belt beers and slap different labels on the same beer? They all taste pretty much the same.

Visited the Pacific Northwest so I had to get one of these just to say I tried it. Well, it's virtually indistinguishable from Natty Boh, the Pabst owned "regional favorite" from where I'm from. Is it literally the same beer in different packaging? Is that what Pabst is doing here? Possibly. (Though the other Pacific NW AAL, Rainier, is different and considerably better.) Oh well, this beer is probably not like it was decades ago, but it's still pretty ok, and if you want a big 24 oz can of it for a couple bucks you can't go wrong.