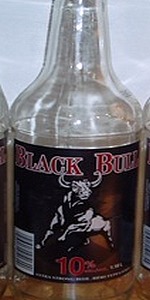 Notes:
View: Beers
Reviews: 2 | Ratings: 5 | Log in to view all ratings and sort

1.18L world-beater bottle. The Silver Creek Brewery named on the label actually means Sleemans, an ostensibly Canadian (I know) company, but since it is made south of the 49th, I'm just gonna drop this right here on Pabst's lap.

This beer pours a clear medium straw colour, with one finger of thin foamy white head, which leaves some ropey lace around the glass as it quickly abates. It smells strongly of sugary grain malt, and slightly less so of nail polish remover. The taste is more sweet, sugary grain, buttressed by that saccharine character that ol' lady liquor can impart. Speaking of which, the booze is remarkably hidden in this gem - only a mild warming bespeaks its subtly proclaimed "10 PERCENT" party-starting (or ending) ABV. On to the carbonation, we find a low bubble quotient, so as to not fuck with the desired sugary nature of the body, I suspect. Even if I'm wrong on that assessment, smoothness is well rendered, if a bit oily, with barely a tiny hook on the palate from the simmering heat. It finishes off-dry, the sweetness still hard to ignore, some warm, musty dryness helping only so much.

Did I mention this sucker is dangerously boozy? Oh, right. I'm stopping at less than a single glass, because I like getting my drunk on with the good stuff (well, stuff at least better than this). Given how surprisingly easy it was to get through this paltry amount, I can totally see the appeal of this particular kind of evil. I just have a feeling that I am outrunning a coming cataclysm here - as the cold seeps from the remains of my glass, other, much less pleasant creepy crawlies seem to be emerging...see ya!

Black Bull as imported into Canada is brewed under the name of The Silver Creek Brewery, yet is listed under the Stroh's banner by the LCBO, which is actually brewed by Pabst.
Not to be confused with Stroh's in Canada which is brewed by Sleeman.
Light golden product with limited head. The body is medium with a slight grainy aroma.
The taste is of sweet malts and the high ABV is very evident in the taste as well as the end result.
Easy to consume but where will I wake up?

Black Bull from Pabst Brewing Company
Beer rating: 2.65 out of 5 with 5 ratings