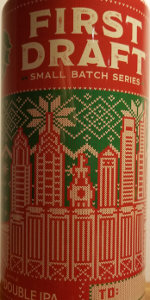 Notes: Dreaming of Hawaii this holiday season? Or putting in that backyard pool with your Christmas bonus? Our new Holiday Hazy Double IPA will take you there. It is soft, juicy, and bursting with pineapple and tropical fruit flavors. And after a few sips you and your holiday crew will be the jolliest bunch of assholes this side of the nuthouse. Mele Kalikimaka!
View: Beers | Place Reviews
Reviews: 3 | Ratings: 4 | Log in to view all ratings and sort

Undated can into pint glass. Pours a slightly hazy amber with a nice off-white head. Initial impression is orange, grapefruit, caramel, tropical fruits, and maybe a bit of pine. Mouthfeel is fairly thick but stops short of sticky. Finish is sweet at first, fading to a slight pine bitterness. This is by far my favorite from Yards!

Pours a hazy orange with a thick, white head.

Taste is bready malts played against white pepper spiciness and balanced by earthy hop bitterness that finishes cleanly, with the fruit hidden way in the background. It's not at all what the fruit forward aroma would lead one to believe, and reminds me of an English take on a NEIPA.

Nice and rich mouthfeel, but very easy drinking - perhaps dangerously so for an 8% beer.

As a NEIPA, it's definitely a first draft. As an IPA in its own right, it's pretty tasty. Yards may not have hit the typical NEIPA, if that's what they were going for, but they made a unique hazy IPA - and in the current saturated market that's far more impressive.

Lead off by popping open a pint can. Already there's an earthy malt-hops combination going on. Poured into a clear pint glass, a copper-amber color becomes apparent. Thickly headed and glass lacing, it looks like there might be something substantial to this. It's not hazy in a NEIPA way, but it's not translucent, either. This one drinks consistently from sip to aftertaste, rather than malt forward, hop finish of many a DIPA. Said taste is very well balanced between the malt and hops, with no unpleasant sweetness and a muted hop presence expected in a hazy. This is a deliciously earthy malt and mildly bitter hopped tasting DIPA that goes down easily. Given the chance, it's recommended.