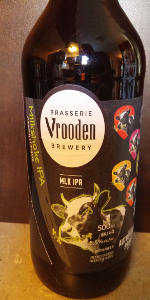 Bottle: Poured a cloudy dirty beige color ale with loads of floaties and a medium size dirty white head with OK retention and light lacing. Aroma of intense vanilla notes with some floral fruity hops notes is quite nice. Taste is also an intense mix of vanilla with some residual sugar notes with some nice floral hoppy undertones. Body is full with limited filtration and good carbonation. Well brewed but quite intense in terms of flavours which limits drinkability and amounts of floaties make this one more or less enticing.

T:
Follows the nose very closely with a clean citrus-zest-bite. (3.5)

O:
This is an all right beer.
It is, at the very least, interesting and inoffensive for the most part.
However, I can't say as though it were an excellent IPA. It pours very nice with an impressive aroma right off the bat. As you get used it you notice that it is mainly a really pleasant vanilla aroma. It is not listed but it has to be vanilla. It is really clean and clear with a little extraneous fruitiness. The flavor is more on the bitter side with a citrus zest sticky bitterness on top of everything else.
This beer almost confused me. It was interesting, fairly tasty and I didn't drainpour it or anything so extreme. The vanilla character takes everything over. Luckily it was very nice as far as vanilla goes. It was not quite an IPA in my opinion though. Anyway, I could see just calling this a "milk beer" or something and perhaps that would ease my only real gripe. Truly divisive. Or something.... Not bad, though. Just different. (3.5)

*- Ordinarily, I try to keep style in mind as much as possible. This one would definitely have scored higher if it weren't labeled as an IPA. However, it was an interesting, "not-bad" beer. The vanilla character was pretty nice compared to some I've had.


Milk IPA from Brasserie Vrooden
Beer rating: 3.45 out of 5 with 4 ratings