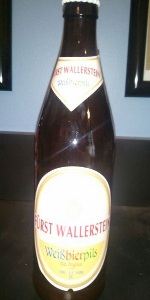 Weißbierpils? What is that? You'd imagine that it's a combination of a weißbier and a Pilsner - and it is!

It looks like a combination of the two styles, with a hazy golden body beneath a thick, creamy head of bright white foam. Tiny effervescent bubbles can be seen racing towards the surface. If it was clearer, it would look like a pilsner. The head retention is excellent, and it leaves some very nice lacing behind.

The aroma is limited, which is interesting, but I find pilsner malts and hops, as well as some yeast aroma and clove-like phenolics.

The flavor is at first more reminiscent of a pilsner, displaying pilsner malt and some spicy, floral, and herbal hops. The phenolics of the weizen yeast, however, quickly step in and erase that notion. I'm not so sure that there's not a bit of wheat in the malt bill either. Clove-like phenolics dominate at the swallow, and linger in the finish along with a light touch of herbal hops, as well as a subtle note of lemon.

In the mouth it's medium-light in body, and crisp... pretty much right on for either style.

Overall it's interesting due to what it is, but it doesn't hold my interest based on its specific components. There's not enough weißbier character to it, nor enough pils, and it just falls into a muddled middle ground. If I had to chose one side or the other hough, I'd say that it exists, in a way, like a tempered weißbier because in the end it's the clove-like phenols that win out and leave me wishing that there was a little more hop flavor. It's drinkable though, and certainly well-made; I wouldn't turn away another bottle!

500ml bottle into a pint glass.

A: Pours a cloudy golden color. The head is slightly less than two fingers high, with a white shade and fluffy texture. Retention isn't great, though. A small ring of lacing is left on the glass.

S: I wasn't sure what to expect from this - a pilsner with wheat, a pilsner/weizen blend, or what have you. What I'm getting is mainly a pilsner with touches of fruit esters and wheat malts. No, come to think about it, I'm still not sure what it is. The problem, mainly, is that the nose is very mild - that means none of the notes can really define themselves here. As a result, it's muddled.

T: I'd say the flavor works a bit better. The front end has a touch of noble hops, with a fruity flavor gradually building. Unfortunately, there's also a touch of oxidization - nothing to kill it, though. There are also some nice weizen esters to finish it off. Simple, but refreshing.

M: The feel is slightly sharp, which leads me to think the pilsner roots are shining through. Oddly, the carbonation is pretty low. Still, it's very dry finishing and very easy to drink.

O: It tries to be two beers at once, but doesn't really pull off either facet that well. Having said that, it's still refreshing and enjoyable to an extent. Worth trying, but don't go out of the way to do so.

Finally visited my local Total Wines store to try this one. I've been wanting to try it's unique characteristic flavor which marries an ale and a lager to create what I call an aleger. It's a true German beer brewed from an historical brewery in Munich which have been around since 1598. So I expected nothing short of good ol' german goodness. It's usually sold out, but this time I grabbed the last bottle. I'm a huge lager and ale fan, but for right now I'm into the lagers.

A - bright, light yellow hazy hew; your typical wheat ale haziness but not quite as hazy as the hefeweizens
S - primarily a smell of bananas followed by grassiness with a hint of spiciness from the cloves; a medium bready smell with not much citrus aroma that's typically encountered with lagers
T - bananas with clover spiciness; malty, bready and yeasty flavors with very little citrus taste; VERY mild bitterness from the hops as an aftertaste
M - medium carbonation, light-bodied, smooth texture and an easy drink like most lagers.

O - A very good "aleger"; a solid B+ in my books. Very clean cut, well-balanced, crisp aleger. Definitely recommend giving this one a try! Great when paired with pizza and breads due to the good yeasty and banana-bready aroma and taste.

Into a pils glass. Two and half fingers of head on a cloudy, orange colored body. Looks great.
The aroma is a wonderful mix of yeast, orange, banana and apricot.
The taste is mild overall: a little banana, mild lemon bitterness and a touch metallic.
The texture is crisp with fizz.
The taste was a real mish-mash that didn't work for me, but it's still a very drinkable beer.

This beer comes across as much more substantial than its abv shows. It has the classic wheat ale haze and color, tremendous head, and superb mouth. While it's an easy drinker, it's so refreshing you can't help but be satisfied. Much more involving than most pilsners, and as such it makes for a very good experience. I can't find much at falut, if anything. Very well done.

Poured into a weizen glass a dull hazed lemony tinged golden with a huge blooming white head that left a few globs of lace as it settled ever so slowly.Aromas are grainy with a tinge of iron,some lemon and wheat malt notes linger a little.Easy drinking and a nice mix of grainy slightly doughy pilsner malt and light phenols and bright lemon notes from the wheat.This would be a great beer and will be a great beer to be outdoors grilling this spiring,another nice beer from Furst Wallerstein,an intersting hybrid.

Poured from the bottle into a tall Pilsner glass.

A nice white head hits with soapy retention. Manages a classic inch cap on the glass. Body color is quite hazy, and dull muddy yellow, with a mish mash of fast and slow rising carbonation.

Nose hits with a distinct peanut butter smell. It smells like peanut butter, and nothing else, even a little dry roasted peanuts. Boy this is weird, I haven't had this experience since Burried Hatchet stout. Very un German pilsner sensing.

Palate enrichs though on first sips. A nice malt sweetness comes, with hints of honey. Then a large almost Heffe fruit quality comes in, but with some apple, and bubblegum. Lots of finishing fruit on this mixing of apple, and pears. Finishes quite clean, with a light body, not as dense as most German pilsners I've had. Aftertaste lingers quite long, even some dry flour/bread action.

This is a well made brew, but boy is it different compared to most German brews I've had. Unfortunately this is not what I look for in this style, so I wouldn't have this again. It's very impressive though, and worth seeking out for first timers. The wheat angle on this doesn't bring me any pleasure.

A: very hazed. doesn't look like a german pils. looks more like a keller pils. frothy head. retention is good, clumps of froth.

S: lots of wheat. grainy. black pepper. ethanol. too much ethanol for a pils. reminds me more of a hefeweizen than any sort of wheat pils.

T: similar to the nose lots of wheat flavor. fruity. banana. no ethanol but definitely more on the fruity/ale side of things than the lager side. virtually no hop bitterness or flavor.

D: expecting a pils, this much wheat isn't doing it for me. the wheat flavors/esters get in the way that this is supposed to be a pilsner. wish they would have focused on one thing instead of making a cross-breed that shouldn't be crossed.

Can a wheat ale also be a lager? And if it can, will I like how it tastes? I have 500 ml to find a conclusion. On to the beer:

A little cloudy and pale on the pour. In a tall weizen glass, this beer looks a somewhat cloudy, golden field in the body, topped with a somewhat airy head. Good head retention and a few strings of lace cling to the glass. The nose meets a pleasing meeting point between the traditional hefeweizen and pilsner. The banana bread and clove tell you this is the former, while fresh cut grass clippings attempt to sway you towards the latter.

The taste works. Neither style dominates; just a two-part equation that doesn't overwhelm. There's subtle banana and baked bread which make the base, and the grassy aspect so easy to find in the aroma is there to taste as well. Lemon and a cracker note snap in and out. A little fruity and hoppy in the aftertaste. With a crisp carbonation and light-medium body, the beer finishes on a good note.

In the past, I haven't taken towards hoppy hefeweizens. In Furst Wallerstein's version, the combination is pleasant and maintains the easy to drink character.

dang! amazing! i added TWO new beers to BA's list tonight and i wasnt even trying!
this says it is a wheat/pils.... interesting, huh?
pours a hazy, cloudy, golden straw with minor foam.
smells of floral, wheat, sweet and rich.
tastes very much like a wheat with a dry character to it. hops must be doing their job here.
slightly carbonated. medium feel.
overall, hmm... interesting indeed. wheat-y, weisse-y. some pils taste, for certain. a nice combination, but not something i am looking for every night. too light, way too rich.
i cant believe this isnt already on BA's list. they say they've been around for centuries....


Weißbierpils from Fürst Wallerstein Brauhaus
Beer rating: 83 out of 100 with 26 ratings