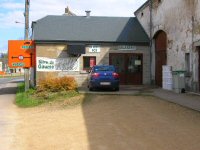 At around 10:30 AM our tour group met with Olivier at the brewery and he gave us an extensive tour. We started with the new expanded brewery, a more modern brewhouse and packaging facility that has only been open for a short time. This looked pretty much like any modern stainless steel brewhouse, and several employees were working on bottling up a batch while we were there. Interestingly, the brewery only uses American hops, and we saw boxes upon boxes of them in the cold room.

After our tour of the new brewhouse we entered the old brewery building (and I do mean old!) where we all settled down at a rough picnic table for some tasting. It was a bit damp and chilly there and also fairly early in the morning to be drinking strong Belgian ales, but hey we were troopers!

We began with the La Rulles Blonde, a 7% ABV beer with a notable hoppy citrus nose and flavor. This one reminded me a lot of the Bink Blonde. I would love to find more of these hoppy blonde Belgian ales in the states but most don't make to our shores. I guess I'm going to have to brew on myself! The 6.5% ABV La Rulles Brune was up next and had a pleasant slightly chocolate character and enough hop to keep this interesting. A lot different from the other browns I had in Belgium. The Tripel was next and also somewhat hoppy for the style, but sweeter than the previous beers. We finished with the Estivale--a lower gravity hoppy beer that was very bright and refreshing. I would love to drink that beer on my deck in the summertime!

This was a great tour and I really enjoyed all of the beers. These guys are certainly taking some risks with using American hops in a noble hop growing region of the world, but I think they are making fantastic beer.