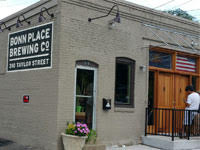 Small brewery on a corner of a nice neighborhood. The service was excellent. Staff was very friendly and waiter/waitress served you at all times. I believe they had 8-10 beers in tap with one being sold out. All different types of variety. Their beer was pretty good. They had a nice Berliner Weiss along with a solid pub ale and 2 decent NE IPAS. Small brewery with a small seating area. They had about 3 or 4 tables and 5-7 bar seats. Solid beer enough to check out new beer. Overall worth the stop.

Very cool little spot in Historic Bethlehem’s Arts District in the Southside. They brew on site and sell their brews on tap in multiple sizes in case you want to sample a bunch and not get hammered. There’s always a local guest tap as well as a gluten free option of cider/mead, all from other local producers. They’ve also got coffee from a local coffee roaster and you can order food from an Italian place down the block and they will deliver it to you! Occasionally they have a pop up food truck or a collaboration brew that they have to offer. Now, I am a little biased because I enjoy the fact that they brew some different styles that aren’t super mainstream. Mooey, their ordinary Bitter and Opus, their Amber ale are both awesome brews. Sometimes they do a sour, sometimes a hoppy brew, but everything I’ve tried has been pretty spot on and true to style. The staff are all great people and hustle when the place fills up and two of the brewers are sometimes behind the bar so they are always pretty open to answering questions a guest may have regarding what they offer. Now, it is by Lehigh university, so sometimes you have a bunch of college students in there, but they always have an awesome soundtrack playing that’s never anything mainstream or top 40, which is awesome and it keeps the youngsters and rif raff out of there. Highly reccomend dropping in here when you’re in town!

Located in a small building on the South Side of Bethlehem, Bonn Place Brewing uses every square inch inside to create an enjoyable drinking experience. I arrived at opening (3pm) on a Friday and was already the 8th person or so there. By 3:30 it was crowded but not uncomfortably so, and nobody had to wait for a beer.

The brewing equipment is semi-visible from inside the bar area. It's kind of cool when the beer flowing from the taps was made about 25 feet away from them. There's a small bar with around 10 seats and other tables and stools scattered around the place. Speaking of those taps, there were nine beers available when I went, including a nitro and a cask offering. Each beer available in 8 & 16 oz servings and reasonably priced (the most expensive pint was $6). Happy hour is $1 off all pints. The focus here is on English style ales with a nod to American pale ales and a couple of other experimental brews like a Yuzu lemon saison and a maple spruce baltic porter.

I started with the beer that I'm told is always on-tap and they have never run out of, Mooey, their Ordinary Bitter. It was tough switching to a different beer after it, because Mooey was delicious and the best beer I had during my visit there. Next up was Nemo, a dark mild, which was served on nitro. Dark milds are a style I really love that you don't see enough of. This was the first time I've tried one on nitro and it definitely worked. Next up was - you guessed it - Titty Sprinkles 3K, a double pale ale conditioned on blood orange, lactose, and vanilla, served on cask. Wonderfully fruity and balanced. Nattmara, a maple spruce baltic porter got high marks from me as well before finishing up with Opus, an English amber ale.

The service was friendly and the owner, Sam, showed up soon after opening to mingle with the guests. The place has a trendy feel, borderline hipster, but completely avoids coming off pretentious. It has an inviting, friendly vibe. If I went to Lehigh U I'd be here every week. Just a cool place with quality beer to match.

I was at Bonn for their Grand Opening party and then haven't been back since (sorry to say - not easy to get to from my house), but was back last night. Bonn has a very cool vibe on the inside with a trendy, rustic vibe - I felt like I was sitting in a small intimate bar in SoHo in NYC... dig it. Last night (and the reason for my visit), I wanted to try That Loud Imperial IPA and the Barrel-Aged Scottish Breakfast Wee Heavy and was blown away by both. Both were superb beers and very well brewed, in fact, the BA Scottish Wee Heavy ranks right up there as one of the best I've tried - it could easily hold it's own in a field with some heavy hitters. (Same with That Loud.) We arrived a little after 5:00 on a Wednesday and it was already packed. I recommend stopping here if anyone is ever visiting Bethlehem, it's worth the drive. Right next to Lehigh University and I can tell they have already built a strong local following. Pretty awesome.

Neat place in the middle of PA. Quite a few beers on tap, maybe 8-9 of their own and then a guest tap of another local brewery. Also included a nitro tap and cask. Only had a couple of the beers but both were well done to style and tasted good. I got there on a Friday at 3PM right as the doors opened, the first one in. It filled quickly and by my second small beer pour it was packed, about 3:30 on a Friday. Most of the customers seemed like regulars and knew each other and the bartenders.

Bartenders were friendly and helpful, pretty knowledgeable, and service was pretty good. Decent music playing in the background. I'd be interested to see it on a "busy" Friday night.

I frequent this place more and more since it has opened. The vibe and the people kept me coming back at first, and the beers just keep getting better and better as this year has gone on. Very excited to see what they do with more experience.

small little quirky building, one block off the main drag of 412. Street parking only - as the large lots are permit only. Bring some change for the meters. Inside is tight but comes off as cozy as opposed to cramped. There is an L shaped bar that fits maybe 10 people, a drink ledge with stools and a few tables. Sectioned off is the brewing equipment. 9 beers available, decent variety, and some unique stuff. No kitchen. Friendly staff, who I believe are the owners.

The place is small but it's kind of pretty cool, slight hipster feel to it but not to the point where I don't wanna go there. The service and selection have been good each time I've stopped in. The beers are getting better in my opinion, should be interesting to see what they do moving forward.