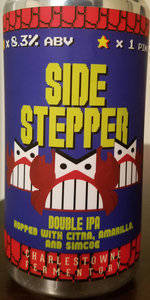 Received as an extra in a trade. I'd wanted to share this with JLindros so he could keep the can label but the backlog has been crazy so this won't happen as while there is no can date I'm assuming this is from November. Sorry dude.

A - Poured into my duvel tulip a nice slightly hazy pale, pale gold with a thick two finger white head that faded slowly to leave sticky lacing and a sudsy almost rocky blanket. Not too shabby.

S - Aromas of really big, bright pineapple juice, hard swirls bring out an almost over ripe cooked pineapple that is rather enticing. Flashes of under ripe pineapple as well. Tropical fruit cocktail with flashes of earthy pine.

T - Taste is similar to the nose just, well, much more muted. The pineapple is there, just, more candied as opposed to fresh, and a bit more green too. The pine is around as well, flashing in and out. The flavour profile is there but it doesn't pop anywhere near as nice as it does on the nose. The hops are still discernible, as in this hasn't become some sort of malt bomb, they've just noticeably dropped off. Though as it warms the pineapple juice flavour comes out slightly more.

M - Mouthfeel is nicely carbonated, little crisp, alcohol hidden very well...the body is on the lighter side though which still makes this drink a touch on the thinner side.

O - Overall this was a solid DIPA, I just think this suffered from having been drank a bit later than it should have. The cost of waiting to share a beer with a friend, at least it still has plenty of redeeming qualities. I'd love to try this fresh as it doesn't drink like a New England IPA but a nice fruity and balanced DIPA. Plus, the label is killer.

From a growler, pours a hazy yellow-orange. An inch of white foam leaves streaks of lacing. Smell is bursing with fresh tropical fruit, pine and earthy herbs. Taste follows. Smooth feel, perfectly carbonated. Not a hint of booze. Top-notch beer.