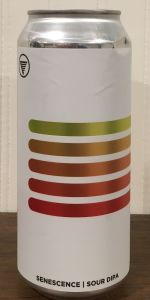 Aroma has notes of cinnamon, mango, nutmeg, vanilla and hazelnut - this is smells like a really weird yankee candle.

Taste follows the nose with notes of cinnamon, mango, vanilla, and a sour twang coating all of it. Its a really weird combination - the cinnamon and mango by itself wouldn't be bad, but the addition of the sour twang just throws everything out of wack. There is enough cinnamon in this to actually provide a bit of spiciness in the beer.

Feel is light, slightly puckering, mild carbonation that shows up more on the back end of the mouth.

Overall this beer reminds me of that quote from Dr. Malcolm in Jurassic Park, I think it goes something like: “Your brewers were so preoccupied with whether or not they could, they didn’t stop to think if they should". The combination here is just not enjoyable - maybe someone else will enjoy that, but I did not.

16 FL OZ can
Served in a HOMES glass

This beer pours a slightly hazy shade of amber with golden highlights. It is topped with several inches of tan head that leaves no lacing.

It smells like a sour snickerdoodle. The smell is actually nice.

The taste is cinnamon and brown sugar with a sour finish.

Medium bodied with a sticky mouthfeel

I am not a big fan of cinnamon forward beers. The flavor combination is just not for this guy. I've never said "Hey, I want a sour snickerdoodle. I'll drink the four pack because it is paid for, but one would have been enough.

Senescence from HOMES Brewery
Beer rating: 3.41 out of 5 with 2 ratings