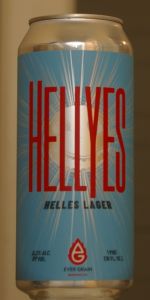 Have you ever heard the adage of "One door closing means the opening of CANother"? The Pizza Boy horizontal became MUCH more involved than I initially imagined! Between long hours at work & not drinking as much as I would like as a result, it was a really protracted affair. It was also CANspirational in that they are based out of Enola, PA, on the west shore of the Susquehanna River, across from Harrisburg. Also on the west shore is Ever Grain in Camp Hill, PA & if that city seems familiar, then you may have been a Book of the Month Club member at one time. Fasten your seat belts as The CANQuest (tm) takes on this undertaking! 2/13.

From the CAN: "HellYes Helles Lager"; "A bright, crisp German[-]style Helles Lager. Soft, malty sweetness is accented by German Hops."

I beCAN by Crack!ing open the vent on this latest 16-fl. oz. CAN. I was heartened when nothing untoward ocCANurred so I CANtinued with a slow, gentle C-Line Glug into one of my newly-procured Pilsner glasses from Ollie's Discount Emporium. This resulted in the formation of two-plus fingers of fizzy, foamy, soapy, bone-white head with limited retention, quickly falling to wisps. Color was a solid-Amber (SRM = > 7, < 9) with NE-quality clarity & my first thought was "BUPGOO"! That is an allusion to the "Howdy Doo-It!" MAD magazine parody from issue #18, in which Bill Elder imagines a powder that, when added to milk, turns it into beer. LOL. Nose was super-sweet, really heavy on the malt. I have a MUCH greater appreciation for Lagers than I once did, but this was pushing my upper limit for tolerance. It was fine for the style, but not my bag. Mouthfeel was thin-to-medium, about on par for the style. The taste was full-on malty & the hops were nowhere to be found. I kind of expected this, given the nose, but it still left me rather cold. Finish had a semi-sweet breadiness that lingered well after the swallow. It was decent, but just not my thing. YMMV.

Draft offering at the source appears a clear golden yellow color with a white head. It has a very neutral aroma that is soft and subtle with fresh grain and mild accenting fruitiness. The taste is sweet and grainy with slightly fruity alcohol development as more sips are taken. This is light in body with light carbonation but effortlessly drinkable and enjoyable per its style.

This was my first taste of the newest Brewery in the area where I live -served chilled on tap in a pilsner glass.

The color is a resplendent golden very apropos to the name with a lasting white head with fine bead. The smell has a noticeable traditional German malt fragrance with slight bready/toasted aroma. The feel is very good with a nice balance of dry and sweet in the malt with mild yeast and low bitterness with mostly dry finish.

The taste is very good - impressively malt flavored with pilsner in the taste adding a sort of sweet yet lightly toasted taste with a dry bready quality from the yeast and low hop flavor in the lager with a nice dry yet refreshing finish. I was very impressed with this lager which is very clean yet still has a good malt presence very drinkable and fits the style well.

HellYes from Ever Grain Brewing Co.
Beer rating: 85 out of 100 with 18 ratings