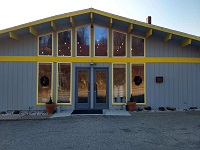 Really enjoyed the beers, but the place left much to be desired. Really need to do something about the smell of the place, because it overpowers the beer. Very glad we could sit outside!

Very good brewery with NO bad options. Excellent beer. Spectacular service limited only by being extremely busy. Lots of friendly patrons and staff alike. Worth the trip for the beer!

This was a nice place. Small but you were basically in the brewery. Most of the brewing equipment is right with the tables. Food has to be ordered else where and either brought or delivered. They do have chips and such. Good beer with a nice selection on tap. Clear descriptions and prices. I enjoyed my flight. Service for me was just okay, but it seemed others were getting better service. So I'm sure the service is better than what I got sitting at the bar alone. They had a small little game area in the back.

Great local brewery serving great local beers. Brewers in site makes for nice service. No food but they do bring in food trucks and there is delivery available.

Went to the grand opening of Yellow Bridge Brewing Nov 3rd. Got there around 5:30 and got the last parking space next to the chiropractor office. Building itself from the outside looks large but inside it is actually pretty small with brewing equipment taking up half the room. Decent sized bar that seats around 15 with 4 tops scattered around the room. We got in line and once we got to the bar, 2 seats opened up. We settled on a 5 beer sampler for $8 which is reasonable. I did notice they charge $2 for tasters. I am not sure if this was just because of the grand opening or policy going forward.

Beers we tried on the sampler:
Uncle Pats Pale Ale, Hazelnut Brown, Delmont Saison, IPA, Lemondrop Cream Ale. We also tried a pint of the Dry Stout. I think this beer would be better on Nitro. Best of the bunch were Uncle Pat’s Pale Ale and Hazelnut Brown and the least favorite was the Cream Ale. Taste of that was bland & watery. Not offensive but needs some tweaking. Overall, the beers were good. There was nothing mind blowing nor did I detect any off flavors.

They did a nice job of handling the large crowd and was pretty organized. Average price of a pint was $6, which is not too bad and they also carry Arsenal Cider & Mead. Nice addition to the Delmont area in that the only other real craft beer bar is 3 Rivers Six Pack Shop so you could tie the two in.


Yellow Bridge Brewing in Delmont, PA
Brewery rating: 4.12 out of 5 with 57 ratings