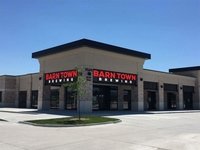 a nice little slice of america here, a neat place thats sort of tucked into a little strip mall, but feels a lot more rural when you enter, with wood features all over the place and random nostalgic americana sort f stuff, an old truck, american flags, old beer cans, its all new though, comfortable without trying to hard. i would have enjoyed the vibe a lot more without the televisions. its hard to feel the vibe they seem to be going for when the golf channel is blasting me with chipping advice. that said, it was mellow and cool in here, and really its all about the beer. they had a great selection when we visited, and i liked all the beers i had. the neon ipa is getting some well deserved hype, but i liked the non drowsy just as well. the sour beer i tasted here still seems like a work in progress, but still worth trying. service was better than average but otherwise unremarkable, and the prices were fair relative to the overall quality. definitely a cool place to post up and have some solid local iowa craft beer, i suspect we will here more from these guys as the word gets out, the hoppy stuff was all excellent!

Summer 2018:
A little less impressive than last time. Had the EIEIO (BLT) and it was good, though drenched in balsamic and fell apart. Bacon steak was a little chewy, not as amazing as last time. Stick with the brewer's burger.

Servers didn’t know much about the beers, which were more hit or miss this time. They’re swerving into gimmick territory with an ecto-cooler beer, talk about unnecessary. Saving grace was a wild ale brewed with Une Anee, had depth and lots of fruit. Would return but probably would stick to the bar for better service hopefully.

October 2017:
Returned for dinner, and was not disappointed. The brewer's burger was excellent, with the house-cured bacon stealing the show. A massive thick slab, crispy outside and fall apart tender inside, with charred ends. Flavor was intense and off the charts, honestly it was on par with the house bacon at The Publican in Chicago. I was told they do a 10 day prep with it, and I believe it. They should do a BLT, their house-made bacon was that amazing.

Beers were great, and plenty of new rotating selections. Highlights were the Pulp Non-Fiction IPA and Chowdah DIPA. Will likely be back the next time we're passing through town.

August 2017:
This was a convenient stop as we were staying nearby, also right next to a Global Brew location which Barn Town was the more interesting of the two. It was on the corner of a newer strip mall which wasn't really appealing but it was nice inside. Spacious and well lit, there was a lot of table seating but we opted to sit at the bar. A bisected antique truck was mounted to the wall, painted turquoise and lined with a 18 tap handles. Quite a variety of styles offered, fruited goses, NE-style IPA, wild saison, and a lot more i'm forgetting.

The bartender was friendly and offered samples, chatting about their beers and the background of the brewery.

Quality was good and the selection and experimentation on display was great. I noticed a rack of barrels in the brewery and the bartender explained they have a BA porter on draft at El Bait Shop as a collaboration with them. Pretty cool.

Overall I enjoyed sampling through the various eclectic styles they brewed here, and would return next time i'm in town. Global Tap House was 2 doors down, but wouldn't bother going again. Generic vibe and lots of filler on the beer list.

We went here to check this place out on a "holiday" Monday. Not real crowded, but I was excited to try a new local option.

My wife had been once before for work but not had the beer. Which is silly! The service was pretty good, considering the amount of people. Our server himself was very friendly and attentive without being pushy. Joked with us a little bit, but also gave us good advice about the food and beer.

After seeing the inside, I understood the name "Barn Town." It was a good balance of "rustic" and "modern." Once through the doors, you really forgot you were in a strip mall in a suburb.

I had a good old fashioned smothered sandwich and my wife had a burger of some sort. Both were really well done and quite tasty. Fries were among some of the better I've had in awhile. You could tell this food wasn't just reheated out of the freezer. And it was priced very fairly considering the quality.

I only got to try about 3 of the beers. I had their IIPA, an IPA, and the brown. The IPA was decent, nothing terribly special, but respectable. The IIPA was excellent, though. I'd heard about it, and it lived up to the hype. I wish I'd had more time, as I'd have drank more of it! The brown was very well done for the style. It's my wife's favorite style of beer and it was very tasty as well.

I'd definitely come back here again. If it weren't on the other side of town, I'd probably try to become a regular!

These guys have really been cranking out some really great hoppy beers, the food is very good and the service is friendly. This is a must stop if you're in the area, and stop at global brew in the same strip.
Edit they changed their Monday special. There are now beers that can't be had on the $10 burger and a beer.