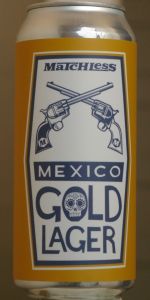 Notes: This is our easy drinking summer seasonal lager. It has a soft lager aroma on the nose and hits the pallet with a quick thirst quenching splash. This beer finishes dry and leave you coming back for more. This beer goes great with a lime on a nor west summer day!
View: Beers | Place Reviews
Reviews: 5 | Ratings: 7 | Log in to view all ratings and sort

Love this brew. Corona wishes they were this good. Get a little lime in this bad boi and you have yourself an all day drinker. Light, and perfected for those that enjoy flavor but want to keep drinking all day!

Clear golden yellow brew with virtually no head in either of the glasses I tried. This would be a lot better with a foamy, fizzy carbonation. But there's a bit of a prickle on the tongue. Just a hint of biscuity malt with a hint of resin in the finish. The faintest bitterness. Pleasant enough, and way better than any of the nouveau Mexican craft beer that seem to be on the bar, for no good reason I can see. From the 16 oz can.

It is a less-hot & less-humid Summer's day here in SE PA, but after a massive 16% ABV beer, I am laying low for a little while, having been lain low by that one. No worries as it is all a day in the life of The CANQuest (tm)!

Fiesta!?! Hahaha. CAN I substitute a siesta as needed? I love these guys!

I beCAN with the Crack! of the vent, but crossed pistolas always make this gringo nervous, so I went with a very slow, gentle Glug. I was rewarded with a brief finger of fizzy, foamy, bone-white head with modest retention that left slight lacing behind for me to follow its trail. I was soon joined by my trail guides, Juan & Jose. While I waited, I took note of the beer's Golden color (SRM = 5) & suddenly, The Gelt Gang of Mammon, Croesus & Midas stealthily appeared! This was disCANcerting as they are usually quite noisy in their desire to lay hands on anything that is gold. They motioned for me to keep mum as I lifted the chalice CANtaining this beverage to my nose. I smelled the corn straight away & knew that something was amiss! This was no American Pale Lager! This was an American Adjunct Lager & Juan & Jose knew it, trying to rip off an unsuspecting tourist. Just then, The Gelt Gang leapt into action, disarming those unscrupulous scoundrels & retrieving my precious pesos. We all sat curbside to see what we had been left with. Nose definitely had the presence of corn, so it could not be anything other than an AAL. Mouthfeel was medium. The taste was not overwhelmingly of corn, but it was not a clean, simple American Pale Lager, either. Matchless CAN (& has) do/done better, we agreed as we sat in the sun, CANtemplating our next move. Finish was relatively crisp & dry, but the lingering taste of corn made us all shake our CANlective heads in disbelief. Why waste time & money on a high-end AAL? It is a shite style with shite flavors. The style description even says so, making this a CANdidate for high rating marks when it is undeserving. This is the problem with rating/reviewing to style & not to taste. The style might be shite, but the beer might be the best example of shite going. It also illustrates the need for acCANpanying reviews. YMMV. As to our lot, we're headed into the Sierra Madre, in search of gold and other such treasures.

A bigger, lasting head along with a deeper, estery aroma ups the respective scores plus boosts the overall. Much better the second time around.


Mexico Gold Lager from Matchless Brewing
Beer rating: 4.01 out of 5 with 7 ratings