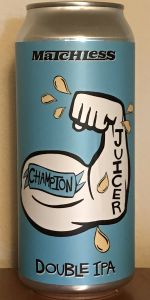 Notes: For Champion Juicer, we went for maximum juice effect to deliver the highest juice units possible! Though no fruit was harmed in the making of this beer, plenty of Citra and Amarillo were! Big and bright with alternating layers of peaches, melons, citrus with a soft, pillowy, almost pulp free mouthfeel thanks to a small amount of flaked corn and wheat; sorry not fruits!
View: Beers | Place Reviews
Reviews: 1 | Ratings: 2 | Log in to view all ratings and sort

$ 6.74 (Including shipping)/16 oz can ($ 0.421) from Tavour, Seattle, WA. Reviewed 1/15/19.
Undated can stored at 42 degrees and served at 42 degrees in a hand washed and dried Jester King snifter.
Appearance – 4.
Body – Yellow, hazy, opaque.
Head – Large (Maximum 5.5 cm, aggressive center pour), off white, dense, average retention, diminishing to a three to seven mm ring and a rocky heaped partial layer.
Lacing – Fair. One giant scalloped band of tiny to small bubbles.
First pour – light yellow, hazy
Aroma 3.5 – Grapefruit, lychee. Fades away.
Flavor – 3 – Muddled – no distinct flavors although it leans toward lychee. The grapefruit from the nose is marked by its absence from the flavor. A bit of the malt backbone shows through. No alcohol (8.8% ABV, per label), no diacetyl, no dimethylsulfide.
Palate – 3 – Medium, watery, soft carbonation.
Impression and interpretation – 3 – Just an average DIPA – some gastric burning occurs shortly after swallowing, but that quickly subsides. This brew is somewhat unusual because of the lychee odor and flavor, but otherwise is pretty typical of the DIPA class of beers. The can commands you to “DRINK FRESH” but they don’t bother to date the cans.


Champion Juicer from Matchless Brewing
Beer rating: 3.69 out of 5 with 2 ratings