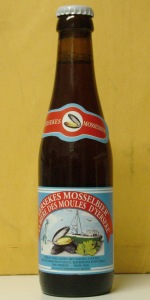 Notes:
View: Beers
Reviews: 6 | Log in to view all ratings and sort

This beer was brewed specifcally to eat with mussels, one of the national dishes of Belgium; and, yes, those are mussels right on the label. And with thanks to Captain Highliner and my microwave, I was able to taste the beer as intended by the brewmaster. It poured a murky, cloudy honey-hued golden after fizzing up over the top of the 250 ml bottle. Appearance reminds me of a good wheat beer. Three to four finger high foamy head remained with ample carbonation, a steady stream of bubbles. Impressive lacing. Very faint smell of soft wheat and banana, but hardly discernible really.

This is where it got interesting: the taste on its own was completely different than after eating a few mussels. Sweetness was there alright and hops, but none of the fruit zest you might find in a wit beer. Balanced bitterness. After savouring a few mussels, I tried it again and found a perfectly silky mouthfeel and refreshing sharpness to contrast the richness of the seafood offering. A splendid finish, perfectly matched with the mussels, elegant was a word I wrote down to describe the experience.

Without the mussel acommpaniment, I would give this a solid four where taste, mouthfeel and drinkability are concerned - but with the mussels, I would guess closer to five on all counts. So I took the average of 4.5 and that was how I scored it. I only wish the bottle had not been the small 250 ml teaser that it was ... I hardly got to know it!

A clear orange, amber beer with a thin head and a steady stream of carbonation.

Taste is strong malty with a tannine and husky taste. I haven't tasted this in any beer, it is not astringent, but more grainy, like you chew on a malt grain, bready almost. This taste determines the overall palette of the beer and makes it a little one-dimensional. A light caramel and maple syrup taste give the beer a rounded and mild taste. Bitterness is almost absent. Body is medium and somewhat sweet and pretty full.

smell - WOW. hot buttery odor, I have not found this in beer before, smells more like a tasty food, might expect a bakery using buttered dough to have this odor. Some carbonation still active in the beer though head drops to lacing. Smell actually makes me think of food and feel hungry.

taste is malty with some notes similar to the nose coming through. Hints of spice complement the near-food taste that comes with it. Overall red-ale taste with some unusual and pleasant elements added in, but certainly the most interesting beer sampled this evening.

aftertaste is malty, quiet. nothing dramatic here, but this beer is worth trying just for the smell. I notice only one other reviewer found the smell intriguing, maybe there is a batch consistency issue?

BB 04-07-07. Litle head and a amber beercollor. Nose is very pale malty with caramellic hint, grassy and smelling these mussels that have to be in there as something unfresh. Taste is also very pale, quiet sweet and empty. Mussels maybe litle noticable in aftertaste in a low dosed bitterness. Balanced mouthfeel but bit watery to me. Drinkable brew but wonder if there are mussels in this brew.

Very sweet malty white sugar Belgian. Cloudy muddy orange and Soapy cream head. Drinkable but not an Ommegang. SOme yeast in aroma to remind you of the style. Subtle dryness. Yes, would be good with salty smokey fish. Clean, light-medium mouthfeel. AVerage beer for the summer.

Yersekes Mosselbier from Brouwerij Van Steenberge N.V.
Beer rating: 3.25 out of 5 with 6 ratings