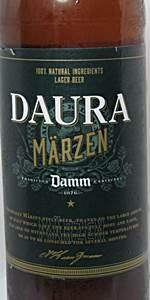 Lovely dark golden colour, pleasant aroma, malty taste with a little complexity, overall this is a winner for me and I never would have guessed that this is gluten free. Dangerously easy drinking for a beer of this strength!

For a double malt, it is very smooth and rich. Has a deep copper color with a head that spreads to 3/4 inch. For a malt, very easy drinking, semi sweet, and pairs well with creamy and light finger foods.

Pours a clear gold with a small but steady head of foam.

Smell is of grain, sweet kind of unpleasant malt.

Grainy and sweet taste, really big cereal..like a LA beings to the table.

Pours out pale amber in color. The head is thin and off-white that's gone in no time at all. Lacing is minimal and splotchy.

The nose has plenty of caramel. You also get plenty of grains and a honey note. Bitterness is almost none existent.

Mouthfeel is medium bodied. Carbonation seems a bit high on it but I dig it. It feels crisp. At 7.2 abv its very easy to drink.

Heavy, malt-forward beer, plenty of esters in the mix.

Bottle. Mid-amber in colour. Thin head.
Light aroma of toffee.
Mild sweet malt in taste. Caramelised sugar present.
Medium body and feel. Somewhat boozy.
I guess this could be a life saver if I was gluten intolerent.

Giving great review because it's great whether you have to drink gluten free or not. Great taste and body. If you like porters or stouts, you will not be dissatisfied!

The beers of this brand are usually a scam, especially their best known beer: estrella damm. I bought this by curiosity. I was surprised favorably. It does not look like a Damm beer, it smells of beer and on the palate you taste that you're having a beer! It's not a wonder, but it's beer!

Things are progressing nicely with regard to my ongoing and systematic eradication of the Bottle Backlog here at Chez Woody and the results are noticeable, but it becomes incumbent upon me to drink and review new beers as they become available. I refer to this as "chipping", since it is just odds & sods without any overarching theme, such as brewery and/or style.

From the bottle: "Crafted to Remove Gluten [-] Product fermented from grains gluten and crafted to remove gluten. The gluten content of this product cannot be verified, and this product may contain gluten."; "Originally Marzen style beer, thanks to the large amount of malt that gave the beer its full body and taste, was able to withstand the high summer temperatures so as to be consumed for several months. [undersigned] (Brewer?)".

I Pop!ped the cap & began a gentle pour, in keeping with my New Year's Resolution and my Lenten denial. Aggro pours from bottles are now (mostly) a thing of the past. Once decanted into an awaiting glass, an in-glass swirl raised a finger of foamy, rocky, tawny head with decent retention, leaving nice lacing in its wake. Color was solidly Amber (SRM = > 7, < 9) with NE-quality clarity. Nose had a sweetish, bready, malty quality, very much like Märzen. Mouthfeel was medium, The taste was sweet, bready, malty and very pleasant. I like these reverse-engineered gluten-free beers since they do not include sorghum which gives most G/F beers a really sharp sourness. Instead, by using standard grains, the taste remains much more traditional. Finish was sweet, very sweet even for an Oktoberfest/Märzen. Phew. I think that one of these is enough for my hophead self. YMMV.

Pours a clear, copper color. 1/3 inch head of an off-white color. Decent retention and good lacing. Smells of sweet malt, pale malt, Euro yeast, hint of hop, and a hint of wheat. Fits the style of a Marzen / Oktoberfest. Mouth feel is smooth and clean, with an average carbonation level. Tastes of strong sweet malt, caramel malt, pale malt, hint of hops, slight Euro yeast, and a hint of wheat. Overall, decent appearance and aroma, with a good body, blend, and feel.

Aroma is complex with lots of elements.

Taste is ok, however I have no understanding of the brown or double beer, as to why it is liked. It seems that all Spanish breweries prefer to create this, as opposed to an IPA, Tripel or porter. Not good for cold, hot, or with food, just heavy and with no interesting flavors...

I thought this was especially tasty, especially for a beer aiming to be gluten free. I've had two other gluten-free beers in my life and they both gave me severe indigestion. Not the case with this one!

S: [2.75] Prominent nose with corn, caramel, a bit of a rust scent, maybe some kind of vegetable odor too that seems to get more noticable as it warms.

T: [3.25] Not like the nose. It has a nice toffee and caramel flavor from the malts. Slight graham cracker flavor too.

M: [3.50] Medium body and carbonation. Nothing stands out here.

O: [3.25] I'll start with the bad. The vegetable scent is not good. I am not sure what it is but it is a turn off and distracts from the flavor. The flavor itself is decent. A good amount of different tones from the malts. The moughtfeel is just so-so and that actually kind of captures the beer as a whole.

Poured from a brown 11.2 oz. bottle. Has a caramel color with a 1/2 inch head. Smell is bready, some light metallic notes. Taste is bready, grains, light alcohol is present, an unusual metallic tanginess at the finish. Feels medium/light bodied in the mouth and overall, for gluten free, not bad, as a marzen, below average.

Poured at 44°F from a 11.2oz bottle (best before end of July 2016) into a beer mug. Consumed on 16Oct16.
SMELL: Mild caramel, toast, and biscuit aromas are supported by subtle scents of floral hops, bittersweet chocolate, and hints of campfire and bitter unsalted cracker.
3.75 out of 5
TASTE: A mild, balanced sweetness of caramel and biscuits first flows on to the palate. Strong flavors of floral hops and mild flavors of earthy hops quickly emerge. The hop profile is slightly boosted as feint flavors of spicy hops follow. Subtle toast and hints of bittersweet chocolate bring some malty balance as the spicy hop flavors grow a little more prominent. Hints of campfire and bitter unsalted cracker close the profile as all prior flavors maintain.
3.5 out of 5
NOTE: I found it incredibly difficult to believe that this was a low-gluten beer. It tasted nothing like the others that I have had in the past. What I found more difficult to accept was the fact that this was a solid Märzen. The noble hop presence was a tad too high, but the malt profile was great. I would recommend to both people searching for a good Märzen and a low-gluten beer.

Probably the best Crafted to Remove Gluten beer available. Absolutely the best for anyone who misses being able to drink Oktoberfest and Marzen style beers with the majority of bad stuff in them.

Light amber color and nearly clear. Moderate head but it lasts throughout the tasting. It leaves a couple of rings for lace with some large spots in between.

There's a fine softness to the nose. A bit grainy in the initial impression. Second notes lean to the lightly toasted malts (probably some decent Crystal).

The taste starts out okay but I quickly get some sweet caramel and, oddly, alcohol warmth. There is enough hop to provide decent balance, perhaps even more than a typical Märzen. Thick body with a modest amount of carbonation. The overall effect seems to be a bit off--too much of too many things: alcohol, hop and malt sugars.

Pours a dark golden, or even copper color with a moderate foam head, which sits thin. Some lacing on the glass.

Tastes slightly bitter with a roasted malt flavor. But mellow, hint of watery.

Feels complex, some mild carbonation, but smooth, with a thickness to it.

overall, interesting taste and feel to it.

Clear golden amber with one finger of white head that drops quickly to about a quarter inch of creamy nitro like head. Lots of fine bubble lacing on the side of the glass.
Smell is toasted bread malts and some herbal spicy hops.
Taste is rich sweet toasted malt with some spicy herbal hops.
Mouthfeel is medium with ample carbonation. Finish is dry and semi sweet.
Overall a tasty beer that I enjoyed. Just watch out for the 7.2%abv. The alcohol is not obvious in the taste but you do get a warming sensation in the chest as you get toward the finish.
Best before date is 05/16.

I first had this beer from a tall can outside a bodega on the Rambla de Mercedes in Barcelona. My Spanish isn't bad, but the label was written in Catalan which is a quite different, and I had no idea that it was a reduced gluten beer. I didn't think it was great, but neither did I find it odd.

It's a clear, deep amber in color with a frothy white head that drops to become creamy. Both the head retention and lacing are just slightly better than average.

Its malty and hoppy aroma is enticing, displaying golden caramel and spicy and floral hops.

The flavor follows, opening up the malt to include a distinct graininess, a slight nuttiness, and a very mild toastiness. There's some fruitiness to it, which is interesting, combining apple and banana. The hops are even more floral than the nose suggests, and it's slightly herbal as well. A firm bitterness balances it, as does a spritz of alcohol. It finishes drying as the sweet malt erodes from the palate, leaving spiciness and herbal hops behind.

In the mouth it's medium bodied and mildly dextrinous.

As far as gluten free beers go, I've already admitted I was unaware of that upon first tasting. Beyond that, it's not a great beer, or Märzen specifically, but it's not bad. It's a little sweeter than I'd like, and the fruitiness is unusual, but I'd have it again.

For someone who dislikes Gluten free, this is the best one I've tried, so gets a higher rating and it's as good as most Marzen.

Poured into a Duvel Tulip glass.

A: The beer is a classic brownish copper color, clear with slow rising bubbles, sporting white head with minimal retention or lace.

T: A more spicy start that leads to a dry body. Sweetness is balanced by the spicy hops.

F: The finish is spicy and dry. The ABV is a factor, but not overwhelming.