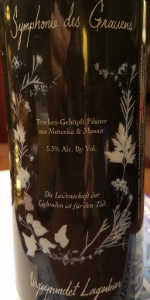 Notes:
View: Beers
Reviews: 4 | Ratings: 8 | Log in to view all ratings and sort

Named after the original title of the 1920's German Expressionist film Nosferatu, FO's newest unfiltered pilsner is an exercise in clever usage of both Mosaic and Motueka hops in the context of a kellerbier. I've enjoyed this brewery's work with kellers in the recent past, so I assume this will follow along much the same path, though perhaps with some interesting elements brought forth by the new-school hop varietals utilized in the recipe.

Pours a dirty orange color with sunburst highlights and a rocky yet steady and quite voluminous head of dense, eggshell-white foam. Lacing here seems rather excellent, with solid legs as well. As expected with the style, and with my memories of previous FO kellers in this pseudo-series, there is quite a hazy appearance to this brew. It's not quite "NEIPA"-ish because the majority of the grain bill is likely pilsner malt instead of 2-row/oats/wheat/whatever, but it's still remarkably cloudy, even in context of what a keller usually is (these days, anyway).

The nose is rife with unique notes of stone fruit, herbaceous flowers, earthy aspects and ripe tropical fruit elements kicking around in the background. Up front I definitely get some melon and apricot with a hint of dank pine resin, hibiscus-like florals, some tannins and fresh-cut grass alongside a strange melange of guava and passion fruit. None of these really come to full fruition, but I can definitely detect their presence here and there. It makes for a really unique nose that seems quite intriguing.

Flavor profile is much more in line with the mineral-laden crackery-maltiness of a traditional keller with a slight zip of tropical fruit and freshly-peeled citrus in the mid-palate. The finish is a nice kick of that same citrus with a little bit of Mosaic-driven dankness, though it's still quite a clean beer at the end of the day thanks to the pilsner base. I'm quite satisfied with the way this drinks. It's enjoyable and unique, but it also doesn't really break too much of the mold in the meantime, acting as a nice bridge between a traditional style and a new twist, mostly with regards to its reverence for the "old ways" while still balancing some new-school hoppy elements in the recipe. A fun one-and-done but not likely something I'd keep in the fridge with any kind of regularity, unlike some of FO's IPA offerings.

M: lighter side of medium with strong carbonation

O: an interesting Kellerbier. It has some of the traditional characteristics, but the citrus from the hops adds a different twist. Does it make the style better...not really in my mind, but! It is still a fine drinking beer

Look: Very murky, even in the thin pilsner glass. Medium head formation and retention, but the cap leaves some lovely lacing.

Smell: Tropical. That is what is throwing you off. This beer is brewed with Motueka and Mosaic hops, rather than traditional noble varieties. Based on just the smell, I would never be able to tell that this is a pilsner.

Taste: Yep, it's a pilsner. I would guess that the malts used here are of the proper sorts, and the bitterness is here too. And, yeah, it shows. In some sense, I find the taste convoluted, almost as if this beer doesn't know which direction it wants to go. On the other hand, it is enjoyable.

Feel: Medium body, which for me, is a downgrade here. I like pilsners to be lighter, and dare I say more crushable. Carbonation is perfect.

Overall: This is a very interesting beer, especially for the style claimed by the brewer. To be honest though, I could drink a lot of these. If you are looking for a proper traditional pilsner, this isn't it. Symphonie des Grauens is about new-age as they come, and I think it has to be graded accordingly. As such, it is a good beer that I would recommend to lovers of hoppy ales and pilsners alike

Can says it's a "Trocken-Gehupft Pilsner", but that's not a choice on BA so I picked "German Kellerbier", which was the closest approximation I could find.

Can dated 12/18/18 into pint glass. Pours a hazy gold with a frothy, fine-bubbled, off-white head. Initial impression is pineapple, grapefruit, maybe a hint of grape and/or passionfruit. Mouthfeel is medium-bodied and quite smooth; carbonation is middle of the road. Finish is slightly bitter and quite citrus-y. First beer of this style, and I'm favorably impressed. (Of course, it's brewed by Foreign Objects so I'm not surprised it's good!)