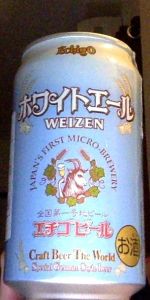 Can poured into a goblet.

It pours a clear straw color with a quickly dissipating head. The smell is very light, with some notes of citrus and a faint hint fruit, perhaps banana. The nose is really faint.

The flavors are also really light on the palate, nothing very assertive at all. It is spicy, with a bit of wit yeast character, but the dominant force seems to be the heavy carbonation. I don't notice much at all in the way of hops, though there is some clove in there.

Overall I would say it is drinkable and even nice, but it is far from fantastic. There are no overt flaws, but neither does it seem like a beer that would really cement itself in your memory. I have certainly had plenty of better wheat beers, and plenty of worse ones as well. I think this would be perfect on a deck on a hot summer afternoon.

Interestingly enough, the can on one side says White Ale in Japanese with a roman character weizen and on the other the two are reversed. So that way anybody can read all the pertinent information!

Can bought in Tokyo, poured into a goblet.

A: Highly carbonated head that stuck around. Color was a hazy golden/yellow.

T: Tingly hop bite at the start, citrus flavors are dominant in the middle and continue into a well balanced finish with the grains/malts.

O: A good well balanced beer. The citrus flavors stand out in the taste, and are enjoyable.

Sampled on tap at Popeye in Tokyo.

This white poured a hazy/cloudy, yellow-straw color with creamy, white foam that persisted and left lace. The smell was a pleasant lemon citrus and wheat aroma. The tastes included: citrus, lemon, wheat, yeast, and hints of coriander. The overall taste was slightly on the sweet side of dry. The mouthfeel was smooth and crisp. The body was medium-light, and the carbonation was medium. This white ale was light and refreshing and was quite drinkable.