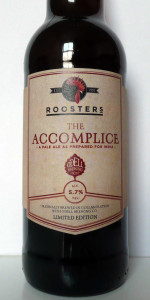 A 500ml bottle with a BB of Feb 2014. Acquired a little while back from Trembling Madness in York. The label describes it as a collaboration between the Rooster and Odell breweries - a pale ale as prepared for India. Contains three kinds of malt and six hop varieties.

Poured into a tulip pint glass. A hazy orange-amber hue with fine sediment and medium carbonation. Produces a decent head of creamy white foam that lasts for a few minutes before reducing to a frothy surface layer. Nice lacing. Aroma of fruity hops with indistinct hints of white grape and mild citrus. Underpinned by caramel malt, earthy yeast and a whisper of diacetyl.

Decent, though not as flavoursome as I'd hoped. Perhaps it has faded? Looks alright, with an aroma and flavour of fruity hop notes and caramel malt. The hops are rather indistinct. Satisfying body. Goes down OK but the hop character lacks the aromatic punch I was hoping for. I'm sure both Rooster and Odell can do better - no need to hunt it down.


The Accomplice from Rooster's Brewing Company Ltd.
Beer rating: 3.81 out of 5 with 3 ratings