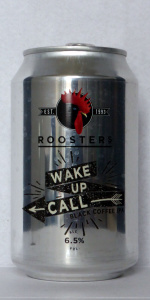 A 330ml can with a BB of Feb 2018. Acquired a little while back from the brewery. The label describes it as a black coffee IPA brewed with Kenyan arabica coffee and hopped with Cascade, Chinook, Centennial and Waimea.

A: Poured into a tulip. A very dark reddish-brown hue that appears black in the glass. Holding it to the light reveals intense carbonation. Produces an enormous head of creamy tan foam that lasts for a while before slowly reducing to a persistent surface layer. Nice lacing.

S: Aroma of dark malt with notes of chocolate, coffee, earthiness, subtle molasses, mild yeast and faint stewed hops. Hop character not much in evidence, though overall it smells great. Coffee is sharp and distinctive.

M: Mouthfeel is smooth and tingly, with spritzy carbonation and decent body. Could be a tad thicker given the strength. Fairly astringent; dries the palate. Aftertaste of intensely bitter coffee, roasted malt, stewed hops, earthiness and ale yeast.

O: Looks great, while the aroma and flavour are stuffed with notes of coffee, dark malt, chocolate, yeast and stewed hops. Seriously bitter. Decent body but could be creamier. A rather nice brew in its own right, though I'm not sure it comes across the way the brewer intended. The blurb calls it a hop-forward black IPA with a hint of coffee, however I find the coffee character to be the defining element of this beer. It clearly isn't a stout, as the malt is insufficient, but it doesn't really seem like an IPA either. More of an odd hybrid of the two styles. Nonetheless, a very drinkable brew if you like coffee and bitterness. Worth trying if you have the chance.


Wake Up Call from Rooster's Brewing Company Ltd.
Beer rating: 3.82 out of 5 with 1 ratings