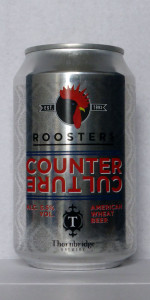 A 330ml can with a BB of Dec 2018 (canned March 2018). Purchased a little while back from Trembling Madness in York. A collaborative brew between Rooster's and Thornbridge breweries, this is an American wheat beer brewed with 40% wheat, Rooster's house yeast and featuring fruity aromatic hops.

A: Poured into a tulip. Can-conditioned. A rich, hazy amber hue with tons of suspended sediment and light carbonation. Yields a large head of creamy white foam that lasts for a few minutes before reducing to a patchy surface layer. Slight lacing.

O: An interesting effort, though I'm not entirely sold on aromatic hops and wheat in the same beer. Looks alright, while the aroma and flavour are dominated by fruity hops underpinned by earthy yeast and grainy malt. Body is OK. Drinkable but a tad muddled. Worth sampling if you come across it.

On tap at Mother Kelly's in Vauxhall. Pours a little hazy with a light reddish-brown hue. The head is medium and left some spotty lace. Nose has some light citrusy hops along with a slight tangy smell, but is overall a fairly small nose. Taste is also fairly light, which is unfortunate because it allows some off flavors through...particularly a light sourness that doesn't help this beer out at all. Still drinkable, but certainly not something I'd order again.