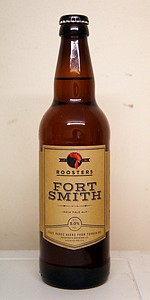 Notes: Named after the town in which Rooster Cogburn lived, Fort Smith is a big and bold India Pale Ale, brewed using Citra and Chinook hops from the USA to create tropical and passion fruit aromas and a lasting, bitter finish.
View: More Beers
Recent ratings and reviews. | Log in to view more ratings + sorting options.

Reviewed by Martine from England

Aroma is mild sweet floral grain with a little tropical fruit. Flavour is quite sweet and soapy from the get-go. Very grassy, nectary almost, and crisp with those bright fruits like gooseberry and pear coming through along with the citrus. On the backend things go a little unripe and bitter, with the hops coming through.

Feel is a bit carbonated, light bodied and a tad oily.

Overall this is alright, quite different from a usual IPA; floral and bright.

Reviewed by DJ-Hophead from England

A: Poured into a tulip pint glass. Bottle conditioned. A rich golden-amber hue with plentiful fine sediment and intense carbonation. Produces a huge head of creamy white foam with a meringe-like consistency; this slowly reduces to a thick surface layer. Nice lacing.

M: Mouthfeel is smooth, tingly and dry, with lively carbonation and decent body. Somewhat astringent, accompanied by an aftertaste of bitter aromatic hops, earthy yeast, mild malt and a hint of cardboard.

O: Not too shabby, but probably past it's best. Looks great, while the aroma and flavour are quite subdued. Subtle fruity hop notes blend with yeast and malt, finishing with a dry bitterness. Body is OK. Goes down alright, but I should probably re-review a fresher example at some point. Worth sampling if you come across it.

Reviewed by mdagnew from Northern Ireland

Boom! Incredibly bright, almost tropical flavors wrung out from Citra - which can be straight grapefruit - plus a bunch of Chinook wood spice. Packs in the flavor at 5%. Aroma-heavy, lots of oil, could nearly be NZ hops; this one surprises and delights in all sorts of ways.

Top Brit NewWorld IPA. Roosters are one to watch.

A: pours a deep golden colour with a very thin layer of off-white head, coming with faint carbonation.
S: the hoppy nose is intensely acidic-sweet citric and salty pear-ish estery, against a rather moderate backbone of pale malts; a swirl would bring out an acute edge of mineral-ish, exotic aroma, full of elderflowery, grapefruity, pineapple-ish as well as passion-fruity aroma, while malts still stay as pretty much on the secondary line.
T: pleasantly effervescent, dry on the foretaste, clean palate, mineral-ish and increasingly bitter, underlined by surprisingly mild mixture of exotic fruity hoppiness. The palate stays clean, while the tangy, almost citrus-peel-ish, bitterness enhances over time towards a long, nicely chewy and tannic finish. Throughout the drink, just like on the nose, malts play an absolutely secondary role, making this ale far more like one’s modern Golden Ale than an IPA this beer purports to be.
M&D: marvellously clean and softly fizzy on the palate, this medium-bodied, wonderfully bitter ale is interestingly restrained in terms of hop flavour esp. on the palate. All in all, a very successful Golden Ale which I would choose as a session beer, just like many other Rooster’s products. Well done!