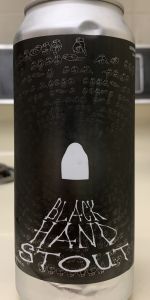 Overall, a real treat at the end of a nice evening---or the
beginning depending on how one looks at it!

Dessert but not too over the top one needs insulin.

4.54/5  rDev +1.3%
look: 4.5 | smell: 4.75 | taste: 4.5 | feel: 4.25 | overall: 4.5
16 ounce can, no dating that I noticed on it. Purchased at the brewery about a month ago. Served in a snifter, the beer pours dark brown/black with about an inch and a half frothy tan head that stuck around for a long time. There's a good amount of lacing. Aroma is nice and sweet, the brew smells mostly like cinnamon and brown sugar, along with some bready and roasted malt, caramel, toffee, chocolate and cream. Taste is similar to the aroma, but there's also the addition of some coffee and burnt/charred malt. But with that being said the sweet flavors stand out in this brew. Mouthfeel/body is medium/full, it's a bit creamy and coating with a good amount of carbonation. I thought this was a really good dessert beer, I was able to try this on tap at the brewery recently and was very impressed with it so I made sure to buy a can to take home! It's very sweet but not quite to the point of being overpoweringly so. If you like french toast, cinnamon toast crunch cereal or sweet tasting beers in general then I definitely recommend this one, it's one of the best beers I've had this year! I'll have to make a point to try the base Black Hand Stout and other variants in the future.
Aug 23, 2019
Black Hand Stout - French Toast from Y Bridge Brewing
Beer rating: 4.48 out of 5 with 2 ratings