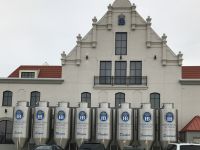 Hofbrauhaus St. Louis is a relatively new location. Therefore, the staff may still be working out some of the kinks. Nevertheless, it took our waitress a while to initially approach the table and the first round of drinks also took too long. After that, the pace of service seemed to improve. On a positive note, our waitress was nice and friendly.

There are 3 beers in rotation: the original lager, dunkel, and hefeweizen. In addition there was seasonal, which in October was a festbier. I had the dunkel, which was a great choice since the temperatures are getting colder. The beer is what you expect for HB beer. It is a respectable German beer that is very popular. However, it reminds me a large commercial beer offering in that it is made to be enjoyed by the masses instead of being an inspirational beer.

The food was mediocre. My wife had a sausage platter with mashed potatoes and sauerkraut. I had a mixed plate that included a pork chop, two different sausages, mashed potatoes, and sauerkraut. The presentation was poor because they just piled everything on top of each other. The taste of the food was rather bland. It seemed to lack seasoning. Most German food has aggressive flavors, but this food lacked that German flare. The food was edible but it wasn’t anything special. It was simply average.

On another positive note, the German soft pretzels that I saw being carried out to several tables looked delicious. They were big and seemed to be very fresh and soft. I will want to go back just to try one of them.

I've been to a few Hofbrauhaus locations now, although I think that this is the newest site. They have a large bierhall, live music, and a small gift shop. Compared to others, it seemed a little spartan...maybe because it is so new? We visited on a Sunday, so they had a German Buffet, and the food was excellent. The beer was typical German styles - well-made and fresh. Worth a visit, but it wasn't the best of this franchise.

Dec 31, 2018
Hofbräuhaus St. Louis-Belleville in Belleville, IL
Brewery rating: 4 out of 5 with 6 ratings