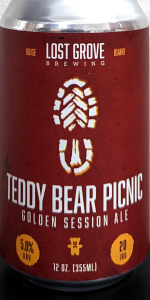 3.7/5  rDev +11.4%
look: 3.75 | smell: 3.75 | taste: 3.75 | feel: 3.75 | overall: 3.5
this is a session type, kind of a golden ale meets a pale ale, nicely hopped, super light, clearish and golden and simple as they go, way more drinkable than the first sight ipa, but also with a bit less flavor and a little less to keep me engaged. its an easy drinker, but it doesnt quite have that pull that most of the other lost grove beers have had, some element that is exciting and attractive and draws me in. a citrus forward hop profile in both aroma and flavor here, a little bitterness as well, some sweetness left from the lighter malt bill to balance that, and high carbonation to keep it refreshing. it has a kind of odd linger, lightly metallic to me, but when its cold thats not really there at all. there is a lemony element, a honey note, and some minerals, a flash of lime. its a lively feeling beer, but it tastes like a million others, and while i like the effort for something easier drinking, i hoped this would be a little more distinctive. it might even be straight up mosaic and citra, although i dont know for sure. overall tasty and drinkable but less exciting than just about everything else i have had from lost grove so far.
Apr 05, 2019
Teddy Bear Picnic from Lost Grove Brewing
Beer rating: 3.32 out of 5 with 4 ratings