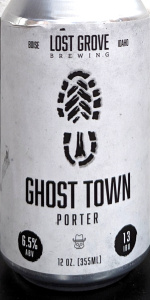 A: Dark, opaque brown with a thick khaki head with tight bubbles and good lacing.

S: Moderately strong coffee, fresh and roasty; mildly bitter, with a nutty presence and the impression of some vanilla sweetness.

O: Tasty as it begins, but fairly one-dimensional as it continues. Still, a good coffee porter.

3.77/5  rDev +0.5%
look: 4 | smell: 3.75 | taste: 3.75 | feel: 3.75 | overall: 3.75
a neat porter with hazelnut and coffee, super flavorful but also dry and drinkable, i was impressed with this. hazelnut is one of those flavors that i think has so much potential in beer, but is rarely done in an appealing way, at least in my opinion, its almost always overdone to me, more of a fake or concentrated desserty nutella sort of flavor and rarely does any justice to what an actual hazelnut tastes like, so i was surprised and delighted to find a somewhat restrained and quite natural nut character to this, almost an almond note alongside it, but real attractive in the nose and while somewhat muted, nice in the taste too. a layer of vanilla and cola essence is also present adding complexity and richness. the coffee is local and its strong in here, some deep tobacco and char notes, neat with the seemingly simple roasty malt profile of the base porter. there is something interesting going on with the fermentation here i think, a light estery note that actually works with the added flavors, curious but enjoyable, with the flavor climax for all of it coming right about on the swallow. fuller fluffy feel without being heavy, dry finish where the coffee and hazelnut sit for a second before fading, and overall a really enjoyable and unique glass of beer. nice job with the hazelnut.

edit: this is sometimes inconsistent on draft, the proportions seem to change between the nuts and coffee, sometimes even tastes like peanut rather than hazelnut, either from batch to batch or as the beer ages, its not always flattering. when this hits its killer bit its less impressive with some frequency too...