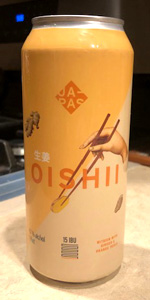 Notes: An ingredient of unmistakable flavor, ginger is highly popular in Japanese cuisine. Along with orange peels and coriander seeds, it gives a special, soft touch to our Witbier.

The name means "yummy" in Japanese, and we made it super tasty, causing the drinker to exclaim an "Oishii" at the end of each sip.

Pours a small finger of white head into my wheat glass, pillowy and a little fizzy. Retention is pretty decent, after a minute only half the head fades, leaving behind a very sturdy base. Initial lacing looks questionable. Body is surprisingly clear, golden yellow in color, with a medium amount of bubbles coming up. So far, it looks good, but not like a Witbier.

Heavy ginger on the nose, which is nice, but it blankets any other real aromas. Maybe a touch of yeast buried in here somewhere. Kinda smells like ginger ale. Smells nice enough, but it doesn’t smell much like beer.

Ginger is more dialed down on the flavor, but I still have a hard time picking up much else. Coriander comes through over time and helps things a little bit. Definitely has a juice-like element to it. Slight improvement over the aroma, but not by much.

Mouthfeel is…mostly there for the style. You get that big burst of carbonation, almost mineral like, very effervescent, on point. The body however, like the appearance, is a little on the light side, you don’t get any of that wheat you should be feeling. Pretty well balanced, if I had to choose I’d day it leans more towards the dry side, but there is a nice touch of sweetness as well. Bitterness is low, but actually perceivable. Not a bad mouthfeel.

Drinkability is very high, that’s certainly not an issue here.

Appearance turned out…uneventful. Lacing was baron to say the least, the head however stayed afloat in some fashion.

Reviewed by hopalongcassidy2 from Massachusetts

4/5  rDev +3.9%
look: 4 | smell: 4 | taste: 4 | feel: 4 | overall: 4
I love Belgian-style wit beers and this a new favorite. It's fairly dry, with a light body and ginger, orange peel and coriander seed as the predominant flavors. Interesting note: this beer is brewed under contract here in the U.S. for Japas Cervejaria, a São Paulo (Brazil), a brewery founded by the three third-generation Japanese women.
Dec 05, 2020

4.01/5  rDev +4.2%
look: 3.75 | smell: 4 | taste: 4 | feel: 3.75 | overall: 4.25
A: The beer is hazy pale light yellow in color. It poured with a short bright head that left lots of lacing down the sides of the glass and lots of specks of bubbles covering the surface.
S: Moderate aromas of ginger are present in the nose.
T: The taste follows the smell and has lots of flavors of ginger and notes of orange peel and hints of coriander.
M: It feels light- to medium-bodied on the palate and has a moderate amount of carbonation.
O: I really liked the aromas and flavors of ginger in this wit beer.

3.75/5  rDev -2.6%
look: 4.25 | smell: 3.5 | taste: 3.75 | feel: 4 | overall: 3.75
Can. Cool, minimal-yet-enticing can art. Pours a mild to moderately hazy golden color. Modest froth. Lots of lace. Aroma is subtle. Ginger, wheat, witbier citrus. Nothing new but the ginger is exciting. When sipping, the ginger comes out more. It’s the most dominant flavor. Batting second is the wheat flavor. Citrusy as well. Not intensely Belgian spicy. Soft, creamy mouthfeel. Solid. The art made me pick up a single of this beer and the flavor didn’t drop the ball either.
May 21, 2020

Creamy aroma with a touch of leather. Little "wheat" nose but still attractive.

The taste has the classic banana-clove flavoring, but not the smell. Richer than many of this style but the higher carbonation cuts that effect. Very little Belgian yeast taste.