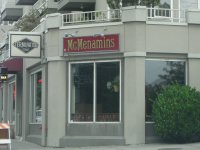 McMenamins Queen Anne is a decent place, and it is fairly standard for most McMenamins locations with a big wooden bar, pubby feel and idiosyncratic artwork. They have 13 taps plus two guest ciders, with a lot more chalkboard beers than I'm used to seeing at McMenamins; unfortunately, however, the ones I tried were mostly underwhelming. Perhaps I caught the brewer on a bad week? Service was decent, however, and I would have no reservations returning to give the beer a second chance to win me over.

While on vacation, was told "this is where the locals go". First beer of vacation so of course it was great. We all tried something different, all the beers were good, the food too. While close to the Space Needle, it's not a tourist trap. If I lived here, I'd be here a lot.

I used to go to Southern Sun/Mountain Sun a lot when I lived in Boulder and this place is extremely similar. In fact I believe the Boulder restaurants were based on this restaurant model. Overall a good place to go to grab a burger and a pint. Their regular beers are average but sometimes they will have a very good seasonal beer brewed up. I would recommend checking it out if you are waiting to see a concert at key arena or checking out seattle center as it is about a 5 minute walk.

Overall Its a good place. Try the IPA or stout.

Taking a stroll through Queen Anne with my girlfriend we happened to stumble on McMenamins. It's right near the Space Needle grounds. I had read about it online after checking for various beer locations upon my move to Seattle.

It was coming off happy hour on a Friday evening so there were a number of people and no available tables. I took a quick peak around and noticed that pretty much every table was covered in pint glasses and pitchers. Always a good sign. Somewhat small but we were still able to grab a seat at the bar. Service was quick and friendly and continued that way.

I started off with the Terminator Stout as their menu stated it was one of their top selling ales (clocking in at 6.6%). The lady had the aptly named Big Bailout. We also ordered the artichoke and spinach dip which was very good. Only issue was that the dip to chip ratio could have been better especially for the price. Eventually, we had a couple more pints and moved on to some pitchers ($12 and change). We were able to grab a table as the crowd tapered off and we settled in to the big wood booths with a quality view of the Space Needle. We tried the Golden Ale, the IPA, the Ruby, the Wheat, the Hammerhead, and their leftover winter warmer Kris Kringle.

The IPA did not have quite the hops blast I was hoping for but overall all the beers were pretty decent for a night of drinking. I would recommend this place for lunch for those who plan on making a day of the Needle and all the attractions like the park, Pacific Science Center, EMP, etc... Reasonable beers at reasonable prices and only a walk away.

We stayed only a couple of blocks from here and stopped in to have dinner. I liked the bright, airy feeling of the dining area and bar. The light wood booths and tables gave it a homey appearance.

I tasted the sampler and most of the beers were good, not great, but solid enough that none were outright bad. The IPA was hoppy enough without excess and enjoyable even for a hophead like me. I understand that brewpubs can't always afford to brew for an esoteric beer lover like me so I don't usually hold it against them as long as the quality is there.

The food was quite enjoyable. We went for the comfort foods in these dreary times. Sweet potato fries and mac and cheese. The m&c was excellent and brightened our day.
Stop by and enjoy a beer and a bite in a pleasant atmosphere.

We stopped here after splurging on dinner at the Space Needle. The layout of the place is a little weird, the bar runs along the the width of the restaurant with the kitchen right behind the bar. You can watch the cooks if that is your thing.

Given that the place was not very busy (10pm on a Thursday), we waited a really long time for someone to say she would be with us in a minute. They weren't busy because we could see the one guy in the kitchen not doing a whole lot and there were only a couple of tables. I started with a pale ale, not bad but not worth having a second (I'd give it a 3), then decided I wanted a dessert beer. I like sweet stouts so I figured I'd give that a try, better than the pale ale but not earth-shaking (3.5). Time to call it a night, not super-impressed, not going back.

Came here after a session at The Hilltop Pub. The bar is located away from the main drag and the inside is funky and nicely lighted. Friendly waitress and bartender who gave me free samples to taste. The food was not bad but not as good as the Hilltop. I thought their Erik the Red on nitro was great and so was the Java Stout they just inroduced. The Ruby and the Wheat were average but overall this was a neat place with some quality beers. Check it out when you are in the Queen Anne neighbourhood and want some low key drinking.

Stopped by here last Saturday night after the Cask Beer Festival. This brewpub is only a couple of streets away from Key Arena, so it was a quick walk. It was very dark when we walked in, almost to candle light level. Looked like a cool place, but it was too dark to get a good reading. There were eight standard beers on tap, plus a Red Ale on nitro, a seasonal Irish stout, and a limited release raspberry stout. I went with the Terminator Stout ("one of our top selling ales"), and my wife had the Wheat. Both were pretty good. Our waitress/bartender was very friendly, she checked up on us a few times. There is a food happy hour after 10pm, so we grabbed some discounted bean dip. Two beers and an app came to $14, so that's not too bad. Seemed like a place that took the beer scene seriously, so I'd be up for going back the next time I am in town.

I went in here a few times while living in the greatest city on Earth. i always enjoyed strolling through Queen Anne neighbothood and popping in here for some brew. The staff was always pleasant and never to busy, The food was good and it was very laid back. It is in a great spot. It has your standard McMennamins brew and I am a big fan of the Hammerhead.If you're in the area stop in. You feel welcomed as soon s you walk in..the bar is right there to greet you. I thorughly enjoyed this placeand everyone I brought in wanted to go back.

Mcmenamin's has achieved amazing consistency across their over fifty establishments in the Pacific Northwest. The décor is astonishingly coordinated, the food is always fine (not great), their beers are always good (not great), and unfortunately their mediocre service seems to be a theme as well. The servers at McMenamin's Queen Anne were hard to find; glasses were empty too long. Considering McMenamin's works to brew and serve their own beers, it would be nice if the people who worked there were somewhat familiar with beer styles. When our server was taking our order, he asked what my friend wanted and I said, "she likes pale ales," to which he replied "well, we have Coors Light." A trip to McMenamin's is more likely to be enjoyable than not, but it's so close to great as to be frustrating.

There is a very interesting combination of decors here which create a comfortable atmosphere. Sort of a chinese meets art neuveau meets the grateful dead. Any way my wife and I liked it. It was early on a sunday afternoon and was fairly quiet (business wise). We were waited on quickley and politely. The food came out quickly and hot. The Chris Rocks Jambalya was great and French fries with Chipotle ketsup was neat. All beers were fill to the top so getting a head for descriptive purposes was a little difficult. All beers that I had were tasty. I only knocked the selection because I saw a guy at the bar with a coors light bottle in front of him.

McMenamins has a series of brewpubs in the Pacific Northwest, including a couple in Seattle. This one is located just a block from the park where the Space Needle stands, so is a good lunch stop on the tourist trail. It's a dark but cozy place with low ceilings, wooden boothes and tables. They have 18 taps, eleven of which are their own brews. The variety was wide ranging (wheat to stout), but limited to ales only. Service was hard to attract, even at 1:00 on a Saturday afternoon, when only a handful of the 25 or 30 tables were occupied. Once I got the waiter's attention, he was fairly friendly, knowledgeable and helpful. The food was just OK - decent fish, but cold and limps and a pretty sorry looking salad.

The beers were generally good, not great, quality. The wheat beer came with a lemon (that's a negative in my view), while the imperial stout, while good, came out much, much too cold. Still, an overall pleasant experience.

McMenamins Queen Anne Hill in Seattle, WA
Brewery rating: 4.13 out of 5 with 1 ratings