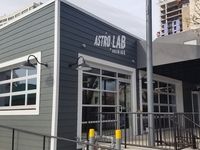 Notes: A Kiwi and a Brit met in a bar and the rest is history.... well kind of!

​Co-Founders Matt Cronin (the Kiwi) and Emma Whelan (the Brit) share a mutual love of all things craft and artisan - especially beer! After several years of drinking, eating and talking, their paths aligned and together they created Astro Lab Brewing.

​An astrolabe is a symbol of history, journeys, innovation and craftsmanship. Astro Lab Brewing brings a modern day twist to each of these elements throughout our company, our people and our beer.

There is a passion for craft in everything that we do. Whether it be brewing beer, providing a unique experience for our customers, sourcing local ingredients, partnering with skillful makers or developing the unique skills of our team, our culture is one that creates and fosters an unfiltered and unadulterated passion for craft.

We are committed to being local, inclusive and an integral part of our neighborhood. Our community is our customer and our customers are our community. Through outstanding service, attention to detail and inspiring conversations, our brewery and taproom is an open and welcome environment where we can all meet to create and discover great beer and ideas. Join us!

A short walk from the Silver Spring Metro station, Astro Lab is closeby to Silver Branch Brewing and Denizens. Space is somewhat small, especially when it gets crowded. Staff there are very friendly and knowledgeable. Not sure if this is always the case but it seemed like half their taplist was IPAs of various sorts. Being a hop head this didn't bother me, but I can imagine there are people out there that are less than appreciative of that fact. Food is available, though the pickings aren't lush. The beef and cheddar pie was pretty damn good! Will definitely return.

Astro Lab is one of three decent breweries to grace this former "Beer Wasteland." It is a large and airy venue, with a decent-sized bar along with high-tops and several communal tables, many with families enjoying themselves. They have about 10 taps, including about 5 IPAs, several brewed with single hops. The food menu consists of sausage rolls/meat pies. They have a terrace in front for quaffing beers with Al Fresco. If you are taking the Metro, there is a FREE shuttle bus (No. 28) that passes right past. This is a very nice place and I wish them well. I shall return.

A nice place to get some beers. The service staff was good and friendly. The beers were good. It seemed like a lot of local people came on a Saturday night.

Smallish tasting room with excellent staf.. 10 beers on tap and except for a lager and a stout the rest were IPA’s and pale ales. Despite being so new they are putting out some excellent IPAs.

Astrolab is another offering in the downtown area of Silver Spring. 5 to 6 beers are offered on tap only as a regular basis so selection is limited, but the quality of the beers is very solid to exceptional. However, the focus on the brews are also bent towards more hop offerings, not just IPAs, but also styles that have a bit of a hop forward presence to them. Saison, it's hoppy, their stout, bit hoppy as well.

Service here is excellent, which I've had from many different staff who are all eager to please, and very enthusiastic about the beer and place. Surroundings are a little ordinary and minimalist, but there is plenty of communal room and open spaces. Food options are a bit limiting, with some decent pies, but not too much else.

If you are here for beer though you'll probably be satisfied. Crowlers are available to go either already made or fresh ones can be produced on the spot as well. Currently as of this review they don't provide growler fills.

This new brewery actually has a bit more room inside than it looks like from the outside. The interior is typical tasting room attached to a brewery pseudo-industrial. The bar has maybe a dozen stools, with a half dozen or so large picnic tables for additional seating. The staff mainly tend the bar, but will make sweeps through the seating area to collect glasses and occasionally take orders if demand allows for it.

It wasn't a busy day when we visited, and the staff were friendly and talkative, discussing the beers, their makeup, and the business in general. At one point, a bartender noticed the dregs of a keg weren't up to snuff and replaced a few patrons beers with a fresh pour, including us (there was a slight improvement in the quality, but the returned glass wasn't bad by any means).

Speaking of quality, the five taps available were all about the same level - solid. Within those five beers, there were only two styles, however - mostly hazy IPAs (a milk stout was also on, and a pale ale and saison were listed as recently kicked). It looks like these IPAs (And pales) will be the focus. Perhaps as they build up business, a few more offerings can fill their 16 taps and increase the selection score.

I didn't have any food, but they had charcuterie and meat pies (that smelled quite good). This place would be nice for a stop by after work or if you are in downtown Silver Spring for other reasons. You might have to find a public parking garage nearby on busier days, as there wasn't too much parking right at the brewery.

New brew pub in downtown Silver Spring, opened a few weeks ago. Visited last night. Being so new, the beer offerings were limited to five, but they were all very good. They said they will be expanding the beer selection as they brew more. Has the now-typical-for-nano-breweries modern/industrial look--clean, simple and functional. Founders are from New Zealand, which is reflected in food options that are also limited in number but tasty. Well worth a visit.