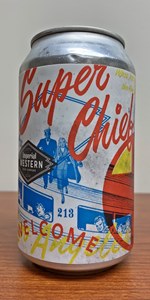 1st review on BA, but no karma points for being such a trailblazer. Had this at the Congregation House in Pasadena with Jordan & Dr. Carroll before the Rolling Stones show on August 22, 2019. Pours a light amber like color. I dunno what the deal was, but every pale ale and ipa I ordered from this place was a darker than average SRM, but nonetheless, looks decent. Wasn't all that aromatic. No bad smells. Just a hint of what was a little caramel and pine.

Taste, popped right away with the Simcoe. I liked the bitterness. Even had kind of a Centennial/Chinook like pine part to it even though I don't think those hops are in the beer, could be from the maltier caramel association similar to SNPA playin' psychosomatic tricks on me. The mouthfeel was lighter than the appearance would make one think. Not a bad ipa by any means, but also not one that I'm telling everyone to drop what they're doing and have a try.

Superchief from Imperial Western Beer Company
Beer rating: 3.82 out of 5 with 3 ratings