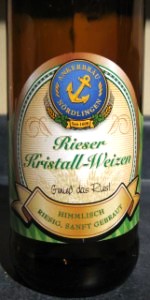 3.61/5  rDev -4.2%
look: 4 | smell: 3.5 | taste: 3.5 | feel: 3.75 | overall: 3.75
Poured into a weizen glass. Pours a medium golden amber with a two finger white head with good retention and lots of lacing. Aroma of grainy wheat, lemon citrus, hints of banana, toffee with a little butteriness. Flavor is wheat, lemon citrus, faint clove, finishes quite citrusy, dry and a little tart. Light to medium bodied with sharp carbonation. Although the wheat base is nice, with more lemon than expected, the tart finish seems out of place in this style. Perhaps I got a slightly compromised bottle, but everything else seems to be in place here, so perhaps this is intended to be more citrus and sour than usual. Not quite what I expected.
Aug 05, 2016
Rated: 3 by olradetbalder from Sweden

Reviewed by joemcgrath27 from Canada (AB)

4.15/5  rDev +10.1%
look: 4 | smell: 4 | taste: 4 | feel: 4.5 | overall: 4.5
A - clear golden with 2 fingers white soapy head retaining well, some light lacing
S - a very leafy grassy hop scent, some light metallic type notes, along with grainy toasty malts, classic bavarian
T - grassy with light banana yeast notes, the metallic quality is almost not in the taste, and light florals on the finish
M - medium carbonation, a light and easy drinking body, leaves a slight tingle on the tounge
D - this is a very easy drinking classic german beer, the only way to describe it is well rounded in every aspect, the whole is greater than the sum of the parts

4.29/5  rDev +13.8%
look: 3 | smell: 4 | taste: 4.5 | feel: 3.5 | overall: 5
A- The bottle has a twist off cap, similar to an old style pop bottle, which I haven't seen before. Upon the initial pour, there is a very white head, that isn't super thick and it is very fizzy around the edges. There is lots of fine carbonation rising from the bottom of the glass as well. The color is a very clear light gold and there is some modest sticky lacing clinging to the glass.

S- The overall aroma has some of the usual citrus notes but also contains a deeper fruity aroma, mainly of bananas. Further in, there is some drier biscuit and grainy smells that are complimented by a modest hop bitterness. It smells clean.

T- The overall flavors are crisp and mild. The banana fruitiness is very noticeable, and I usually eat a banana a day so it's not hard to pick this out. There is also some sweeter wheat and barley malt flavors noticeable. The finish is a mix of slight floral and more dominant leafy bitterness. A very nicely balanced beer in terms of flavor.

M- The body is on the thin side...normally I wouldn't like this as much, but in this case, the watery body accentuates the crispness of the flavors. The carbonation is very fine and zippy, scrubbing the palate really well.

D- This is probably one of the best wheat beers that I've had. The overall character is light and mild, but with enough flavor to keep anyone interested. This is a perfect warm weather beer and I would love to have this on the patio with grilled fish and salad! I recommend this to anyone!

Reviewed by Shadman from Canada (AB)

Light straw colour, crystal clear ( hence the name) with a nice bone white head, great retention even cold out of the fridge. Lot's of fine bubbles tising from the centre.

Crisp start with very nice malt and banana flavour with a hint of pepper spice thrown in. Finish is dry and crisp with a slight clove spiciness.

body is a nice medium, maybe a tad high on the carbonation end, but still works well with the crisp taste.

Hope this one sticks around as it is going to be killer good once it gets hot. Best Krstalweizen I've tried yet...

A clear straw yellow with some very tiny particles I wouldn't have noticed if I hadn't held it up to the light, very little carbonation I'm talking one bubble per second popping up from the bottom of the glass, unusual in this aspect. fast falling thumbs width of head left no lace

S lots of banana and wheat not much else

D decent beer for this warm day, sinks pretty quick and with the low booze I could drink a few of them without worries

don't know much about this brewery and this style is something I don't see much of either, I also can't think of another beer that has this resealable twist of cap I see here

This beer pours a very slightly hazy, medium golden straw hue, with one zaftig finger of puffy, loosely foamy, and soapy bone-white head, which dissipates fairly quickly, leaving a mere ring of sudsy lace around the glass for its effort.

The carbonation is a bit on the high side, what with its Panzer-esque piercing frothiness, the body a stoic middleweight, and generally smooth, all owing to the robust inherent fruitiness. It finishes clean and rather dry, yet with a bit of that pithy banana and citrusy fruit character persisting.

My German isn't very prolific, so all I can discern about this beer from the label is its Bavarian origins, and adherence to that region's (in)famous purity law of 1516. What I can say is that this, being my first Kristalweizen, is a nicely restrained version of a hefeweizen, mostly relying on subtly to get its point across. Overall - enjoyable and quite drinkable to my English-Canadian speaking and drinking palate.