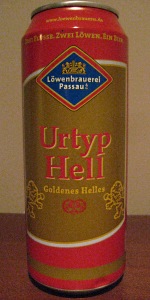 Appearance: Light golden body, with a bit of haze, crowned by a small, dense, and persistent white head. Thick and largely unbroken sheets of lace adorn the glass walls. Numerous columns of small bubbles drift lazily to the surface.

Aroma: White bread and cracker malts define the aroma, there are also grassy and floral hops, and a slight note of light caramel.

Taste: Opens with cracker and bread malt and mild herbal hops. There is just a hint of light caramel midway through the taste, and a mild bitter apple rind note. Late in the taste, there are hints of metallic and medicinal hops. Finishes with spicy and grassy hop notes that linger on.

Mouth feel: Fairly full, perhaps a touch on the thin side, with a little zesty carbonation.

Presentation: Packaged in a 500 ml, 16.9 ounce steel can, served in a standard Pilsener glass. Expiration date on the bottom of the can is 03/2019. Beer number ten (December 10th) from the 2017 Costco Advent Beer Calendar.

Pours a clear straw yellow with a finger of white head. Head retention is okay with a few dots of lacing left behind. Aroma is clean, with biscuit and bread malts, and a slight dose of resiny hops in the back. It has a sweet maltness to it, but is light and refreshing. Flavor profile is biscuit, and bread malts and resin, and herbal hop notes. It has a light, refreshing, and crisp taste. Mouth feel is crisp and medium in thickness. Overall, a crisp, refreshing brew.

From Costco. Can. In Bavaria hefe glass. Playing Fix me Fix you. Correct helles, without any out of place flavors, a pleasant maltyness and highly drinkable. However, its a bit flat.

Day 10 advent....500 ml poured into a Pilsner glass. Clear pale gold with a three finger head. Decent amount of lace retention. Grassy, floral aroma. The taste is the same,layer in some bread and biscuit, with a slightly bitter finish. Medium light feel and level of carbonation. Overall, a light lager worth a go.

From the Advent calendar. Poured into a snifter. Clear golden straw color with a one-finger white head. Floral and citrus aroma along with some grainy malt. The taste was more malt with cracker and white bread. Hope flavors were very muted with low bitterness. A muddled and somewhat metallic taste on the finish.

Golden straw appearance with soapy, puddle foam. Taste is creamy, malty dryness with subtle notes of bread and apples. Great take on the style. Probably best helles lager I ever had.

Day 3 of the Brewer's Advent calendar. 500ml can, poured into a Weizen glass.

Smells and tastes a little fruity, light and crisp. It's got a bit of a carbonation bite as well.

I was not super excited when I opened Day 3 of the Brewer's Advent Calendar and found another Munich Helles Lager; however, Urtyp Hell is distinct from Day 2, Wittman's Urhell, in a number of ways.

Urtyp Hell is very light in appearance, looking very pale gold on the pour. It has a surprisingly creamy head that has left nice lacing patterns on the glass as I drink it. Like many of these German lagers, it is very clear.

Naturally, the typical lager grain smell is present, though the malt is contributing little else. There are more hop notes than I would expect for the style; they are mostly lending an earthy aroma.

Urtyp Hell is immediately clean and somewhat crisp. It has more body than I'd expect from the color. The carbonation leaves a faintly lingering sting on the tongue. There is also a lingering dryness, though I'd hesitate to call the beer astringent.

Overall, I like this beer a bit better than Wittman's Urhell. There is a little more body, a little more bite, and more hops, which as an American craft beer drinker I crave. As a pale lager, it's still pretty high on the drinkability scale, and could easily be one of many in a session.

From the can, it pours a light golden color with a nicely sized head. The head lasts a while. Lacing as well. The nose gets the light malt, followed by the mouth enjoying the light flavor. More of a summer time beer to me, enjoyable none the less!

Served from the can in an Ohio State shaker pint glass.

Day 3 of the 2016 Brewer's Advent Calendar. This one pours a clear straw topped by a finger of lightly off-white foam. The nose comprises vague grains, light biscuit, grass, and some mild flowers. The taste brings in more of the same, along with a general sweetness throughout. The body is a hefty light, with a light moderate carbonation and a fluid feel. Overall, an unmemorable beer, nothing bad, nothing all that great, but pretty easy-going regardless.

500ml can, day 20 of the 2015 Costco Beer Advent Calendar - a rare brew that is not from H. Egerer as a contribution to this overall offering.

The carbonation is quite active in its assertive and commanding frothiness, the body a so-so medium weight, and sort of smooth, an overarching clamminess really starting to horn in after this one moves away from fridge temperatures. It finishes off-dry, the gritty base malt kind of sloughing off the remains of its previous cohorts.

Yeah, this is just another middling, hard to really get particularly excited about German lager - nothing all that wrong with it (other than already detailed), but that doesn't buy me anything, does it? Not worth seeking out, unless it's the only brew being offered on a sunny patio in a land far, far away from me right now.

Aroma: mild mix of malts and hops, with slight dominance by the spicy hops. Lightly sweet up front but mild bitterness by the aftertaste. Hints of baked bread. Light hops add grassy and herbal notes a well as some faint spicing.

Light body and medium carbonation with a touch of dryness in the finish.